It seems that Samsung got one more new entry-level device in the works that might be unveiled in the near future. It was reported a few weeks back that Samsung could be working on announcing its first Android Go device under its J series of smartphones. The device already passed through the Geekbench test under the model number model number SM-J260G, and rumors suggest it will be called the Galaxy J2 Core.

While Samsung is yet to officially confirm whether or not it is interested in the Android Go programme, the latest scoop from Korea points towards the existence of the Galaxy J2 Core.

Sammobile reports that Samsung has filed for the trademark of the Galaxy J2 Core with the with the Korean Intellectual Property Office.

While trademark filings often precede the launch of new devices, it is pertinent to note that Samsung is in the habit of abandoning a trademark, so its possible the J2 core might not come to fruition. 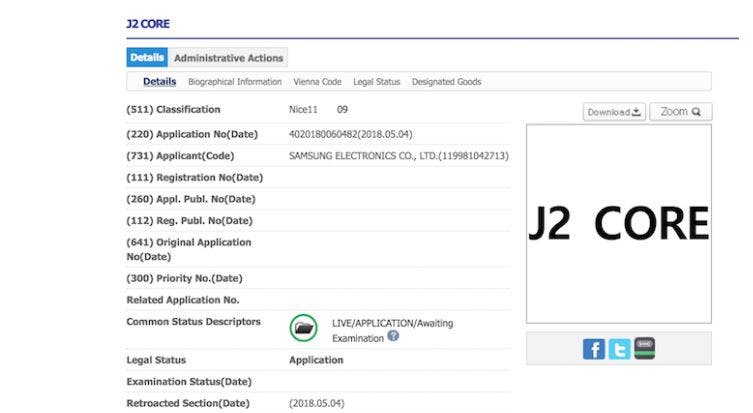 A Samsung made device with the model number SM-J260G alleged to be the Galaxy J2 Core was spotted on Geekbench a few week back. Powered by a 1.43GHz quad-core processor coupled with 1GB of RAM, the alleged Galaxy J2 core according to the listing is based on Android 8.1 – which is probably the only major indicator that the device might be an Android Go smartphone.

Next ASUS ROG Gaming Smartphones to Come at COMPUTEX 2018