Recently, a flagship smartphone of the South Korean LG was announced. The LG G7 ThinQ released on May 2. It comes with a number of trendy and innovative features. But because of such a decent specs list, it also costs a fortune. As you should know, this premium handset is available at 898,700 WON ($834). So it is not affordable for many customers. In order to come in with a cheaper model, the company has been working on the mini variant of this phone. It is assumed to be called the LG Q7. There is no hint when this device will be uncovered, but it’s appeared in GeekBench today. So there is every reason to think the lightened version will hit the market in a month. 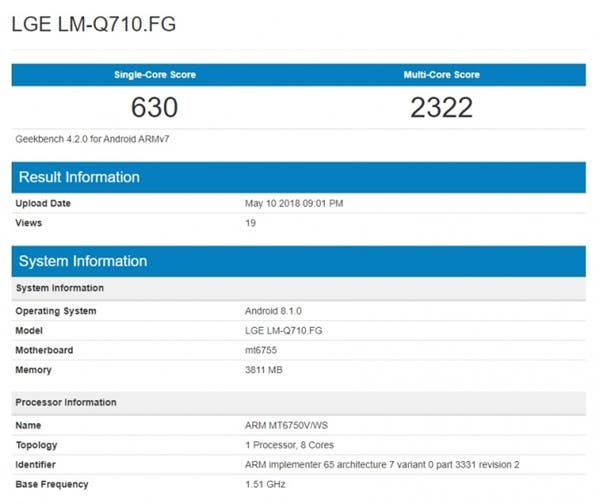 A mysterious smartphone with a model number of the LG-Q710 was leaked on a GeekBench database. It will be the rumored LG Q7, undoubtedly. As the screenshot shows, the phone will be packed with a MediaTek Helio P10, which scores 630 points in a single-core test and 2322 points in a multi-core test. Apart from this, the Q7 is said to come with a 4GB of RAM and run on Android 8.1.

As for the LG Q7, it’s said the phone will adopt a full-screen design too. But it’s odd the manufacturer has chosen the MediaTek Helio P10 instead of a Snapdragon 4XX series chip. The P10 is an octa-core SoC with a 64-bit processor that is based on a 28nm HPC+ process technology. It also uses Cortex A53 architecture and the maximum CPU frequency is 2.0GHz. Finally, the processor is paired with a Mali T-860 MP2 graphics card. This chip is used in such models as the Meizu M3 Note launched in April 2016, Meizu M5 Note announced in December of the same year, and many other Charm Blue devices. So can we assume the LG Q7 is coming to compete with Meizu’s Charm Blue series?