This year Xiaomi runs very aggressive strategy and it’s going to exceed all expectations. This statement refers not only the sales in the domestic market but overseas as well. That’s not a secret Xiaomi has set a goal to reach 100 million shipped units in 2018. To achieve this goal it is going not only opening too many stores in various markets and strengthen the offline sales but also launched many models with good hardware, stylish look, and affordable price tag. Today, a new smartphone leaked on GeekBench database with a code name of Xiaomi StRaKz. 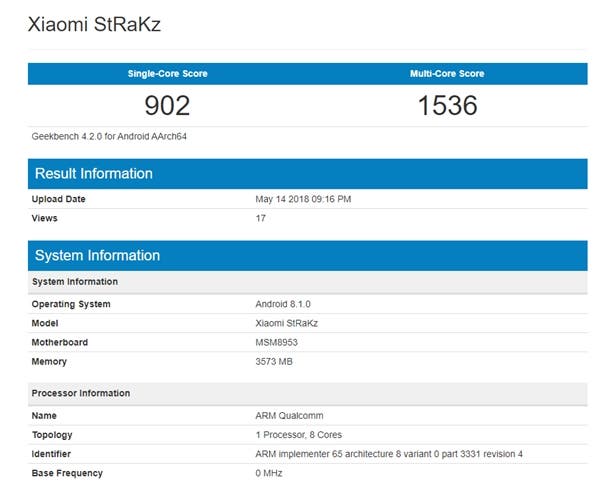 Actually, there is no hint what a smartphone we are dealing with, but the Snapdragon 625 chip and 4GB of RAM prove it will belong to the low-end category. So there is every reason to think it’s another Redmi line handset. By the way, the Xiaomi StRaKz scores 902 points in the single-core test and 1536 points in the multi-core test.

There are too many Snapdragon 625 – powered phones. So it’s too hard to make assumptions in order to find out which of them the Xiaomi StRaKz may refer to. But we know the Snapdragon 625 is an absolute leader in the low-end market. It’s been released back in Q1 2016, and perhaps, is the most used Snapdragon chip in the world. A combination of adequate performance and unmatched efficiency makes it the ideal low-end SoC. Many will think it’s a mid-range SoC, and the Snapdragon 4XX series chips represent the manufacturer’s low-end models, but let’s not forget there is the Snapdragon 660.