Lenovo’s VP, Chang Cheng took to Weibo to reveal camera samples clicked by the Lenovo Z5. The images have a watermark on the bottom left corner, confirming the presence of dual cameras on the Z5. 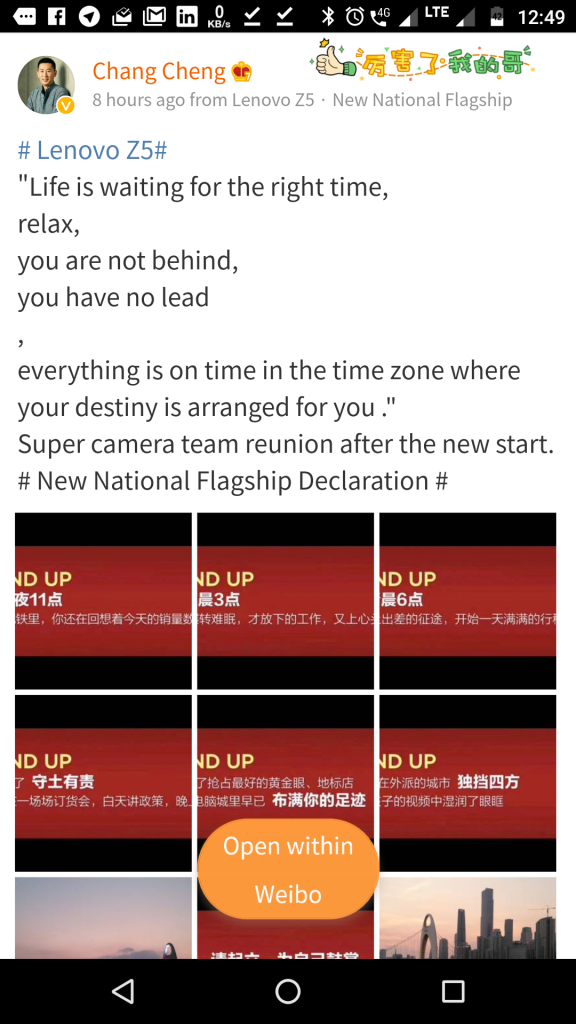 Chang Cheng has been dropping hints about the Z5 since a while now. Last week, he claimed that the Z5 would sport a whopping 4TB of storage (which seems completely unnecessary, unless you want to have a hard-drive on you at all times). The phone is also expected to sport more than 95% screen-to-body ratio. Apparently, Lenovo has around 18 patented technologies which couls be used as game changing moves in the market. The Z5, if it does really come with 4TB of storage will significantly blur the line between a smartphone and an external hard drive. The Smartisan Nut R1 did manage to do that to some extent with its 1TB of onboard storage.

The Lenovo Z5 seems like it will be a complete game changer. Preliminary sketches that appeared a while back show no presence of a notch or bezels. Now that is just fuel to more speculation. The reason why every other smartphone except the iPhone X has a chin, is because Apple used a flexible OLED screen that has been curved internally to accommodate the flex connector, thus pushing the connection over to the back. This is another reason why the iPhone X is expensive. Now, if the Z5 has managed to find a way to get rid of the chin without a flexible display, it would mark the start of another trend in the market. Or if they use the same strategy as Apple, the Z5 will be nothing close to an affordable flagship. It might even feature an under the screen fingerprint scanner and camera. These are just speculations but we are sure there’s more interesting reports coming our way. Stay tuned.

Next Huawei Opens A Smart Life Pavilion In Greater China