A new leak suggests that the Korean electronics company is gearing up for a launch of 5 new smartphones in collaboration with three Telecom operators in the country. LG V35 ThinQ, Q7, Q7 Plus, X2, X5 are the five phones speculated to launch in June. 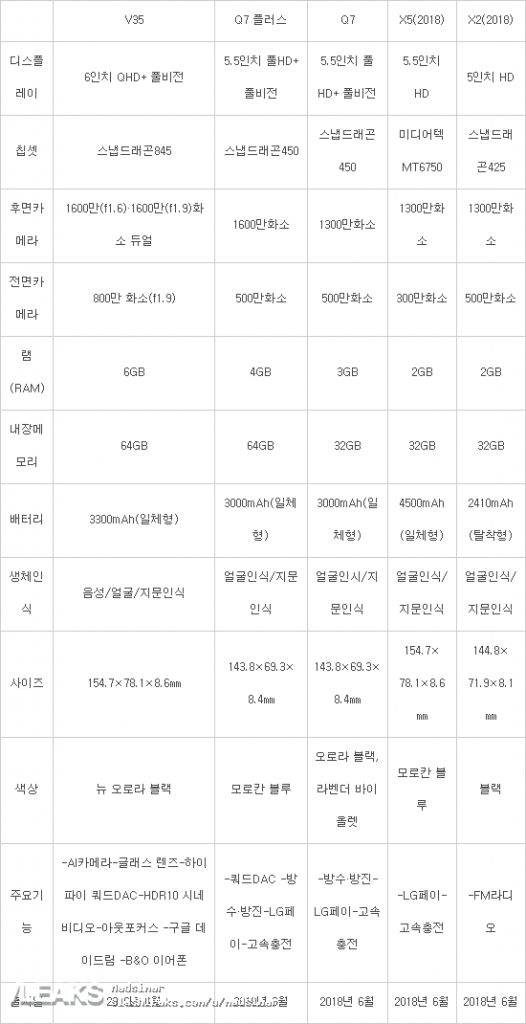 The LG V35 ThinQ, other than its horrendous name will sport a 6-inch OLED FullVision OLED display with a QHD+ resolution. It will be powered by the Snapdragon 845. The V35 ThinQ is expected to sport 6GB RAM and 64GB of onboard storage. The dual camera setup will sport two 16MP snappers, same as the G7 ThinQ. The front camera on the other hand will be an 8MP snapper. A dedicated DAC and B&O speakers will be a part of the package. The phone will be powered by a 3300mAh battery.

It’ll be on par or even better than the LG G7 ThinQ which has an equally horrible name.

LG Q7 and Q7 Plus Specifications and Pricing

The Q7 and Q7 Plus were launched just two days ago. These mid rangers are expected to be priced between $370 to $463 in Korea. Checkout all the details about the two here. They are expected to hit the European market in the next month and in other international markets subsequently.

The LG X5 and X2 are low end devices as far as the specs are concerned. The X5 (2018) will sport a 5.5-inch HD display. Handling the internals will be the MediaTek MT6750 coupled with 2GB of RAM and 32GB of onboard storage. A 13MP camera will adorn the back while a 3MP camera will take care of the selfies. It’ll be powered by a huge 4500mAh battery. The price is expected to be around $277.