Xiaomi has two top-tier products lined up for the next two weeks with the Mi 8 and Mi 7, the former of which is confirmed. The Mi 8 is supposed to be a special edition handset will be revealed on May 31. But there’s a non-physical product that has also just been confirmed by the company on Weibo for the same day. Its MIUI 10, Xiaomi’s newest skin atop of Android.

The company posted a teaser on Weibo confirming the software’s reveal today. Interestingly, the teaser comes with a tagline – “faster than lightning.” When compared with MIUI 9 tagline which is – “as fast as lightning”, you can understand what it will be all about. Besides that, the software has largely remained under wraps and very little about potential features is known. If you go by the teaser, the UX will be buttery smooth and lag-free, to say the least. 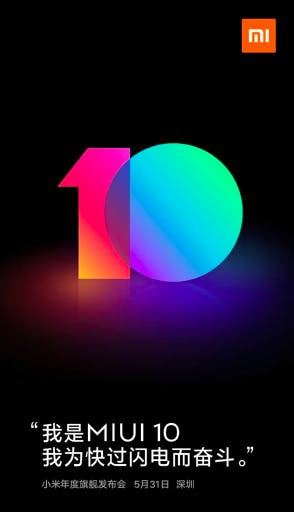 Xiaomi has also recently revealed its home-grown AI assistant in China. With MIUI 10 we could see the feature going global. Speaking of Xiao AI, we’ll be seeing a lot of AI code in the new software assisting the camera, the performance, and much more. Also, look for some visual tweaks and new notification options. We also expect the new software to introduce Android 8.0 to some devices like the Redmi Note 5 Pro in India. However, it might take quite some time to arrive.

As a side note, we are also likely to see the Mi 8 in MIUI 10 colours as it will be the latest and greatest Xiaomi has to offer. We hope they don’t restrict it to China.