Huawei has been trumpeting about a “breakthrough technology” set to debut in a few days with the Honor Play. The company recently teased the launch of the Honor Play which is to take place on June 6. Huawei Chairman, Yu Chengdong, has spoken about this new technology at length. However, he has done nothing to hint at the identity of this new breakthrough.

Chengdong illustrated the effect of this technology with an analogy. In his own words, the difference in mobile speed would be like “flying in the sky” due to this breakthrough.
There have been rumours of Huawei working on its own OS for a long time. But after the ZTE saga, it seems Huawei might have finally though time is ripe for a new pasture. We’ve obtained a couple of images that indicate the new OS will be called Kirin OS. Moreover, as you can see in the image, this OS will be based on Linux. 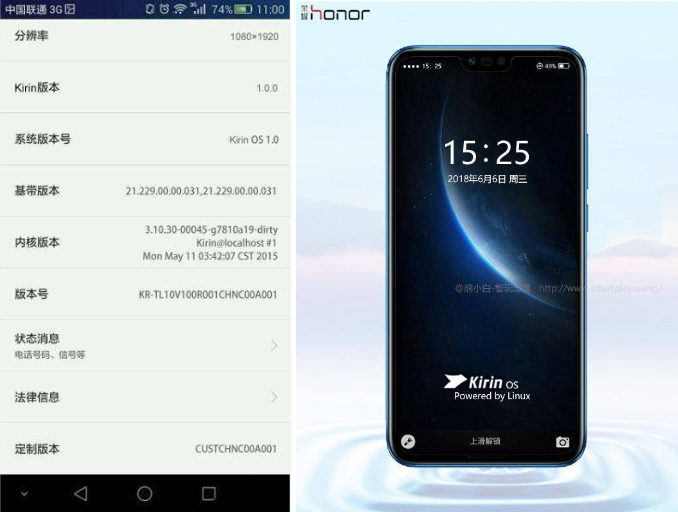 Besides what we’ve found today about Kirin OS, little is known about the new OS. Huawei is not the only company wary of relying heavily on Android. Samsung has been trying to polish its home-baked Tizen OS for a few years now. However, the domination of Android leaves all other systems at the fringes.

We’re also wary of taking these above images for granted. It isn’t entirely impossible that they could be photoshopped, as history suggests. The Honor Play is expected to feature 4F gaming technology as well and launch is on June 6. Stay tuned because we’re as intrigued as you are for the coming week.