Yesterday, we reported the Snapdragon 850 is coming in summer. This chip is going to be the high-frequency variant of the current flagship model of Snapdragon 845. Its main purpose is to reach a 3GHz clock speed. But as you know, the SND850 is designed for the laptops instead of smartphones. Last year, there were three ACPCs with Win10 on ARM. They all were packed with a Snapdragon 835 processor. However, due to the performance limitations and the incompatibility of the compiler, the efficiency of Win32 apps is relatively low. However, Microsoft, Qualcomm, ARM and PC OEMs seem to be very interested in this emerging platform. Microsoft has promised to add 64-bit UWP/exe compatibility support to it. Today, ARM released the high-performance new public architecture Cortex A76+Mali G76, and Qualcomm and OEM manufacturers will take further action, undoubtedly. Today, Roland Quandt made another announcement making the net buzzing about it. According to him, Qualcomm is also customizing the Snapdragon 950 and the Snapdragon 1000 SoCs for Win10 notebooks. 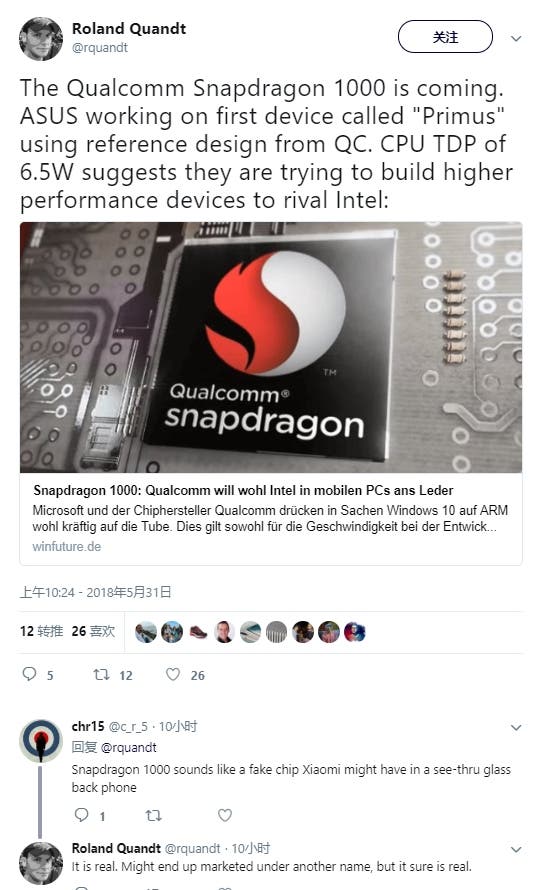 What’s more interesting, Qualcomm will eventually use the name of the Snapdragon 950 and Snapdragon 1000. So we can say though these chips are going to be used in laptops mainly, the company will retain the series’ name to have a stronger impact on the market. They are thought to appear on the 2-in-1 entry-level and mainstream notebooks. As you know, this market is occupied by Intel/AMD x86 processors through advanced processes, compact circuit boards, and the natural advantages of integrated LTE and even 5G baseband.

It’s been said the A76 is equivalent to the i5-7300. So fairly, WinFuture thinks the Snapdragon 950 and the Snapdragon 1000 will fight against the 7-generation Core Y series SoCs. It’s also reported, Asus will be the first company to launch a Snapdragon 950/1000-powered laptop, code-named Primus. It should appear on the market in the Q1, 2019.