On the afternoon of May 31, Xiaomi held a conference in Shenzhen. In addition to the three new smartphones (Xiaomi Mi 8, Xiaomi 8 Mi Explorer Edition, and Xiaomi Mi 8 SE), the Xiaomi Mi VR Standalone Headset was officially launched. The 32GB version is priced at 1,499 yuan, while the 64GB version comes at 1799 yuan.

The Xiaomi Mi VR Standalone Headset was jointly created by Xiaomi and Oculus. Actually, it’s a short-term cooperation, but due to it, they have achieved a reasonable price + high quality. As the company officially introduces, the Xiaomi Mi VR is equivalent to a high-performance smartphone + VR optical system + sensor + somatosensory handle. It does not require a phone or PC connection, as we are dealing with a wireless device that saves you the trouble of complex cable connections thus allowing users to more easily enjoy the VR experience.

This product comes with a built-in Qualcomm Snapdragon 821 processor and a 2600mAh battery. In terms of optics, there is a custom VR-dedicated Fast-Switch 2K ultra-clear screen with a dynamic refresh rate of 72Hz, which can effectively reduce smear and delay. Thanks to Oculus’ specially modulated diffractive optical system, the use of custom-designed Fresnel lenses reduces glare and vertigo sensation experienced by users of previous VR products.

We can write down the Xiaomi Mi VR Standalone Headset is the Chinese version of the Oculus Go. Earlier last month, it was widely praised by western media. Time magazine also reviewed it calling: ‘Facebook’s New Oculus Go Headset Is What Virtual Reality Should Have Always Been.’ Speaking of Oculus, we have to mention Hugo Barra, vice president of Oculus VR of Facebook. Today, at the media conference, he was on the stage as well. 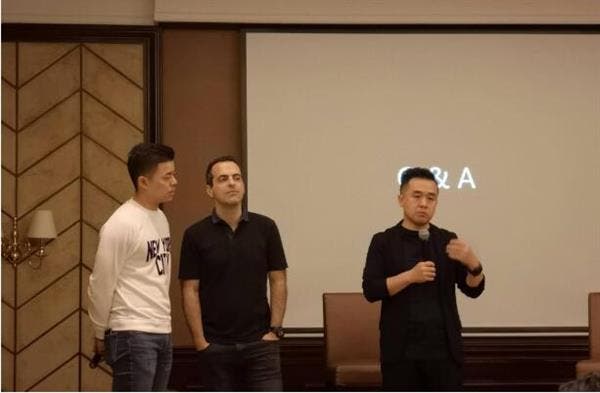 You know, Hugo Barra has a deep relationship with Xiaomi. Before that, he was Vice President of Xiaomi International. On January 23, 2017, he announced that he had left Xiaomi for health reasons and returned to work and live in Silicon Valley. Then in April of last year, Hugo announced that he had joined Facebook and led the Oculus team to develop VR business.

As for now, Xiaomi and Oculus not only reached a cooperation in hardware but also in software. They have jointly created the Xiaomi VR application store, with more than a thousand VR applications and video content. The game has over 10 categories.

According to the official information, it took only four minutes to sell out the first bunch of the Xiaomi Mi VR Standalone Headset. The company has a goal to sell over 1 million units, and the first sold 100.000 units hope they will achieve this number quickly.