I guess everyone agrees that Hugo Barra’s resignation a couple of days ago was a big surprise, especially after spending 3.5 years in Xiaomi. He was the one – after all- who transformed the company from a local Chinese giant, to one of the top tech manufacturers in the world. 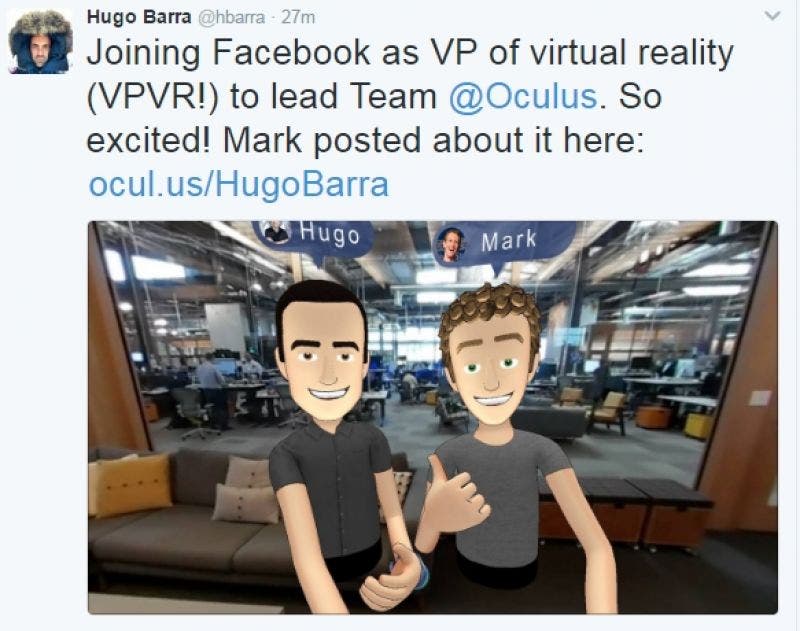 That’s why today’s announcement that he joins th Oculus VR team of Facebook was also another surprise! Hugo joins the team of Mark Zuckerberg as vice president of virtual reality at Facebook and will lead the Oculus team.

Barra is joining forces with Mark Zuckerberg as vice president of virtual reality at Facebook and will lead the Oculus team. Zuckerberg himself first posted the news on his Facebook page:

Hugo shares my belief that virtual and augmented reality will be the next major platform.

According to the official announcement, Hugo Barra will work closely with Mark Zuckerberg, Brendan Iribe, founder of Oculus, Mike Schroepfer, CTO of Facebook and “the visionaries in the Oculus team” as put by Barra.

The news announcement was shared in Facebook along with an awesome VR selfie of  Hugo Barra and Mark Zuckerberg next to each other, even though Hugo is still in Beijing!

So we look forward to seeing what Hugo has planned for us in the VR world of Facebook.

Next Xiaomi won't make an appearance in MWC 2017

Hugo Barra of Xiaomi seems to be having fun with a OnePlus X! (updated)

Mi Home, a place for Xiaomi fans to meet and chill (offline)