In recent times, there have been reports that Huawei is set to unleash a breakthrough technology whose commercial value will reach $10 billion. Huawei’s CEO, Yu Chengdong, said that Huawei will have greater technological breakthroughs this year. In describing Huawei’s new tech progress, Mr. Yu used the word, “Very Scary” which suggests it is a huge advancement. Now, Huawei has announced an EROFS (Extendable Read-Only File System) Linux File System which could be part of this “scary tech”. Huawei’s engineer Gao Xiang shared a new set of Linux read-only file system (EROFS) in the open source community, which is tentatively translated as an extended read-only file system. 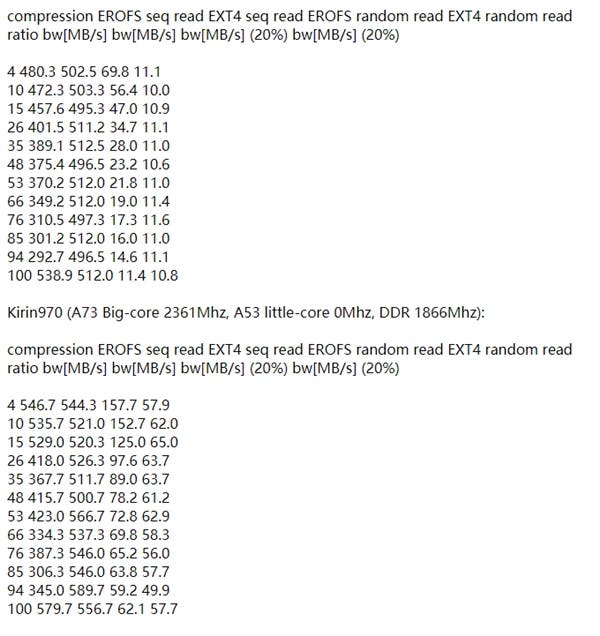 EROFS is only at a relatively early stage of development. The difference between design goals and existing read-only systems lies in the fact that improved compression algorithms are used to ensure space savings while also improving performance and speed. The engineer compared the continuous/random read data of a Linux server and Kirin 970 platform using the two file systems, EROFS and EXT4 (ext4). The continuous reading of the server platform is not very good, but the random data is quite acceptable. However, on the Kirin 970 platform, the EROFS took a clear advantage in reading data randomly and sequentially. It is unclear when EROFS will be included in the Linux kernel. As of now, it is not known if this development is related to Huawei’s “scary technology” to improve the speed of smartphones.

Android is based on Linux, so the main file system includes exFAT, F2FS, ext4, etc. In the Huawei Mate 9 conference, Yu Chengdong has introduced EMUI 5.0 to use F2FS instead of ext4 to improve fluency. This set of F2FS was developed by Samsung and it has made a lot of optimizations for 4K read and write of high-speed flash memory.