On June 5, the Xiaomi Mi 8 was officially available for purchase. It took only 1 minutes and 37 seconds to completely sell out the first bunch. According to Lei Jun’s statement, there were hundreds of thousands of units. This was one of the largest quantities for the Xiaomi flagship handsets. But they got a status out of stock almost immediately. Today, Xiaomi CEO issued a statement concerning the upcoming parties. 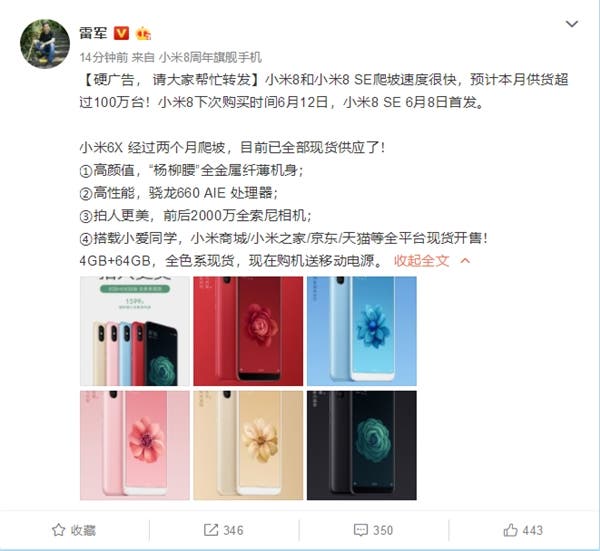 On the last day of the spring, Xiaomi held a conference in Shenzhen. At the event, the Chinese manufacturer announced myriads of new products. It’s difficult to say which of them has been in the spotlight because they all are amazing and awaited. Among them, the Mi Band 3 was an important update after two years of the second-gen launch; MIUI10 comes with tons of improvements; the Xiaomi Mi VR Standalone headset is the best offer in the market in terms of price-over-hardware ratio; and finally, three new smartphones were announced in face of the Xiaomi Mi 8, Mi 8 SE, and Mi 8 Explorer Edition. The former model is an annual flagship; the Mi 8 SE is a quasi-flagship sporting the Snapdragon 710 chip for the first time; and at last, the Mi 8 Explorer Edition is one of the most innovative smartphones around the globe – it is the first Face ID supporting handset running on Android.

As you see, the new Xiaomi Mi products got something to brag about. So their current status is quite logical. Fortunately, Lei Jun said the next batch will exceed 1 million units. As you know, the second take will be on June 12. Moreover, the Xiaomi Mi 8 SE will go on sale tomorrow, on June 8. But Lei Jun didn’t say that number refers to the original model only. So there is every reason to think the total number of the Mi 8 and Mi 8 SE will be more than 1 million units.

Next Selfie-centric Redmi Y2 launched in India: Here are the details