HMD Global back in May, at a dedicated event in Moscow, announced a trio of smartphones namely –  the Nokia 2.1, Nokia 3.1, and Nokia 5.1 as the 2018 version of three of its most basic Smartphone. While HMD Global at the event announced the Nokia 3.1 will go on sale sometime in June, the same device became available for pre-order in Russia a while back and has now gone on sale in Russia and Jordan.

Available in White, Blue and Black color options, the Nokia 3.1 will retail for RUB 11,990($190), while the exact price in Jordan hasn’t been confirmed, but it is said to be available at all sale points.

Outside of Russia and Jordan, there are indications that the Nokia 3.1 might soon go on sale in the States, as the device was earlier today spotted on a retailer’s website with $159 price tag.

While not entirely a game changer, the Nokia 3.1 boasts of some improved internals, a new exterior design, and sporting a fancy tall 18:9 display- making it one of the most pocket-friendly smartphones with the 18:9 aspect ratio. The new Nokia 3.1 flaunts a 5.2-inch HD+ (1440×720) display up from the 5.0″ HD display of the base Nokia 3, while it also gets a boost in processing power from the 1.3GHz MediaTek MT6737 chipset to a 1.5GHz octa-core MediaTek MT6750 chipset which HMD says should result in about 50% boost in performance. 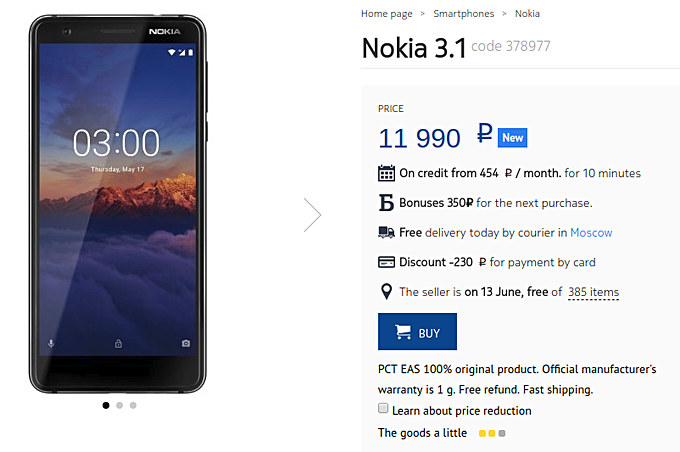 The Nokia 3.1 is available in 2GB/3GB of RAM, 16GB/32GB of internal storage, with microSD slot for expansion up to 128GB. It also gets a boost in the optics unit, featuring a 13MP camera rear and 8MP front cameras both with autofocus and display flash. It is powered by a 2990mAh battery and boots Android 8.0 Oreo based on Android One with a promise of up to two OS update as well as three years’ worth of security patches.