At the end of last month, Canalys released a report concerning the wearables shipments in the first quarter of 2018. According to it, the strong demand for health-centric wearable has contributed to a 35% increase. Thus, in the Q1, there were shipped over 20.5 million smartbands and smartwatches. 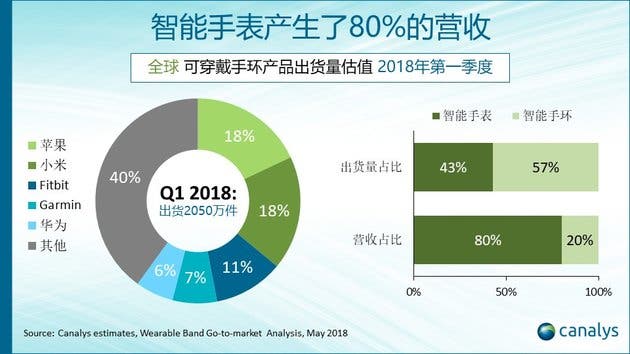 At the same time, the smartwatches contributed 80% of the total revenue. It’s up 74% year-on-year. But when looking at the shipments statistics, we see the smartwatches accounted for 43% of total shipments. In the wearables market, the leader is the Apple with 3.8 million shipped units. However, Xiaomi is breathing down its neck. The Chinese company has shipped 3.7 million units, 90% of which are smartbands. Fitbit, Garmin, and Huawei are also among the top five.

The Apple Watch shipments have stabilized since the last quarter and reached a new high this quarter. ‘The key to Apple’s success is its latest Apple Watch Series 3, which is the best-selling LTE watch in the world,’ said Canalys senior analyst, Jason Low. The Apple Watch holds 59% of the global market for smartwatches. ‘The LTE watch in Apple’s ecosystem is booming, and there is a lack of similar products in the Android ecosystem. If Google decides to launch the formerly-popular Pixel Watch project, it will immediately intensify competition in the market,” said Jason Low.

However, Garmin is currently the second-largest supplier of smartwatches after Apple. It shipped a total of 1 million units last quarter. “Garmin’s transition from the smartbands to the smartwatch business is very smooth, and it will have expertise in the field of GPS to meet athletes and outdoor enthusiasts,” said Vinali Thielke, research analyst at Canalys.

As for Fitbit, Thielke also said: ‘Fitbit is betting on the newly launched Versa smartwatch and expanding its existing market through women’s health tracking services.”

Next Xiaomi Redmi S2 launched in Spain, to be available for purchase soon