While both LG LM-W319 and LM-W315 are believed to be variants of the same watch, the South Korean Communications Commission regulatory authority (KCC) has given LG the nodding to push forward the watch with the model number LM-W319 in that country.

Although the KCC listing doesn’t seem to be giving away many more details about the upcoming device, it described the device as a “certain small-output wireless devices (wireless devices for wireless data communication systems).”

Previous reports have it that either of the devices could be the 2018 update of last year’s LG Watch Style and Watch Sport, or variants of the hybrid LG Watch Timepiece which first surfaced in the news a while back. 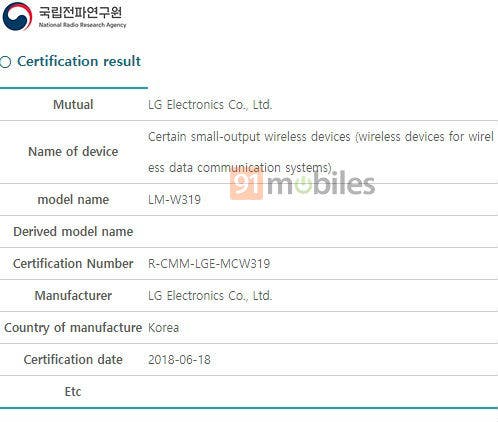 Based on the FCC document listing, the W319 is  tipped to come with Wear OS with Bluetooth,  WiFi, but with no signs or mention of cellular connectivity.

There aren’t any confirmed launch details, but we should expect that to be in the near distant future.