Sony’s Xperia XZ3 has recently been spotted a couple of times in the past two weeks. This has lead to predictions that the handset will eventually be showcased at IFA, Berlin set to take place on August 31. While a comprehensive spec-sheet of the handet was revealed earlier, a new GFXBench listing has shed renewed light on the device internals.

GFXBench listings shed a lot of information about the handsets they scan, however it is also possible to fake them. That said, the Sony model number H8416 harbors flagship-level specs befitting of a Xperia XZ3 title. IT has a 5.9-inch Quad HD+ display, the first ever Sony phone to do so. It also has 18:9 aspect ratio and a of 2880 x 1440p resolution.
It also has the Snapdragon 845 CPU, a hallmark of flagships, alongside 6GB of RAM and 128GB of storage. 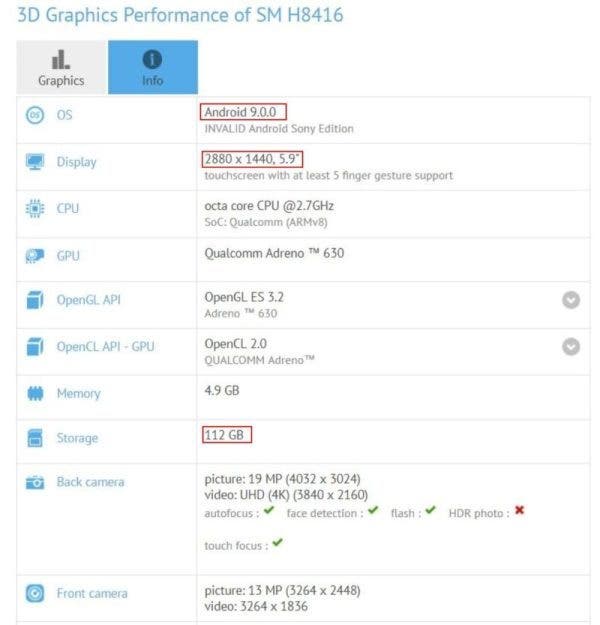 In terms of camera, GFXBench reports a single 19MP lens. Since GFXBench always displays just the primary sensor, this isn’t a surprise. The other could be a 12MP sensor borrowed straight from the Xperia XZ2 Premium’s Motion Eye system. Android version is 9.0 If you want to take a glimpse at the previous spec-sheet leak, check it out here.

It is worth noting that GFXBench scores aren’t hard to fake at all, so this info is better subject to scrutiny before trust. Also, there is no direct source mentioned to the actual GFXBench listing. For that reason, we reserve our judgements. The Xperia XZ3 is thought to get a show-off at IFA Berlin.