Recently, major smartphone manufacturers have launched their flagship models. The most eye-catching phones are considered to be the Xiaomi Mi 8, VIVO NEX, and OPPO Find X. The former handset is the best device in terms of price-over-hardware ratio, while the latter two models are known for their innovative features and genuine full-screen design. Generally, all those models and the rest of flagships come with eye-catching hardware configurations and strong performance. So it is quite interesting to learn which of them provides the best performance. Today, AnTuTu released the top list for June. It also reveals the answer to the question risen. 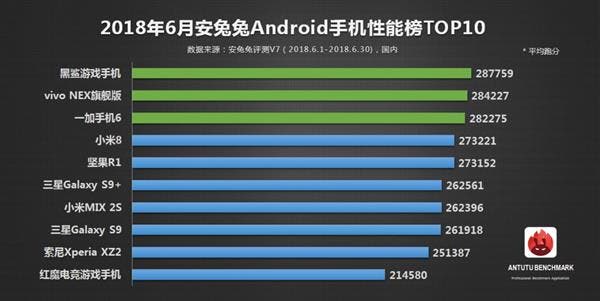 In the new AnTuTu Android smartphone performance list, the Black Shark game phone with a running score of 287759 once again topped the list. The OnePlus 6 with an average running point of 282275 is the third.

It is worth mentioning that the VIVO NEX Ultimate and the Xiaomi Mi 8 are on the list for the first time. With the hardware advantages of Qualcomm Snapdragon 845, they directly advance to the top five, ranking second and fourth respectively.

It should be pointed out that the average running score of the Xiaomi Mi 8 is currently 273221, and the highest score is more than 300,000.

Like the VIVO NEX Ultimate and the Xiaomi Mi 8, the Sony Xperia XZ2 is also on the list for the first time. It is also equipped with the Qualcomm Snapdragon 845 mobile platform. But it landed on the ninth place.

In addition, since the OPPO Find X is not on the market yet, the amount of data is not up to standard. So it is not on this list.

Previous Xiaomi to Focus on User needs while Designing MIUI 11