The Samsung Galaxy phone with the number SM-J2016 which for a long time now has been associated with Samsung’s much rumored and upcoming android Go smartphone has now received Wi-Fi approval from Wi-Fi Alliance(WFA) further fueling speculations the launch date might just be around the corner.

Though WFA doesn’t give out a whole lot of detail, it does reveal the device will ship with Android 8.1 and is compatible with 2.4GHz network frequency  The device has previously gone through the Geekbech site and has also been enmeshed in a web of leaks and rumors in the last few weeks.

While expectations were hight that the alleged Android Go phone from Samsung would ship with stock Android 8.1 oreo Go edition out of the box, a couple of leaked images of the device courtesy of Sammobile indicate that Samsung might have customized the Android Go OS, as the device was seen running the Android Go OS with the Samsung Experience UI on top. Previous rumors have it that the device will come with a compact 5.0-inch display, with an Exynos 7570 quad-core processor clocked at 1.4GHz and 1GB of RAM and 16GB storage. The device is said to come with an 8-megapixel rear and 5-megapixel front cameras, while a 2,600 mAh will light up the device.

Though Samsung as of now is yet to confirm the existence or not, release date and price of the alleged device, reports have it that the alleged Android Go phone will hit the marker under the Galaxy J2 Core moniker, and might debut any time soon. 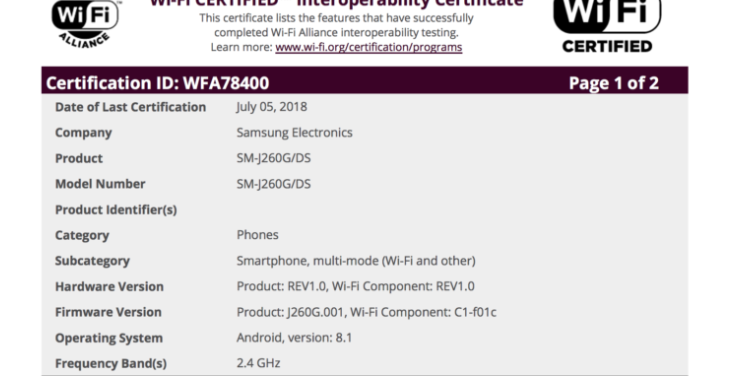