We already know Huawei’s Honor brand will be unveiling the Honor Note 10 soon, but when exactly is what remains to be known. While the device has been on the rumor mill for quite some time, the brand earlier today released a teaser that suggests it would be unveiling the Note 10 soon in Beijing, China.

Now, we have more reasons to believe the launch won’t be far off, as a new Honor branded phone with the model number HUAWEI RVL-AL09 has just passed the Geekbench test. The model number matches the Honor device codenamed Ravel, and which has since been linked with the Honor Note 10.

As per the Geekbench appearance, the alleged Honor Note 10 is seen running Android 8.1 Oreo coupled with 6GB of RAM. It gets a single core and multi-core scores of 1901and 6818 respectively, thanks to an Octa-core chipset running at 1.84GHz. The chipset might be the same chipset found inside the Honor 10 and is expected to come with the parent’s company GPU Turbo.

Though there is currently no concrete info on its internal makeups, Previous reports have it that the Honor Note 10 would come with a massive 6.9-inch Super AMOLED display from Samsung display. There are talks also that it might carry a display notch, while it will come fitted with a large 6000mAh battery.

With the Galaxy Note 9 launch in the horizon, it would be nice to see the Honor Note 10 launch soon, so both phones would present themselves as fierce competition to each other. 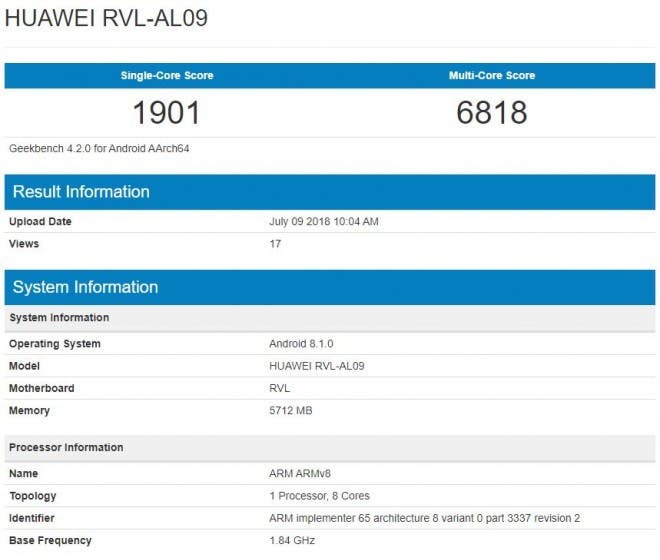