Huawei’s next Mate series may very well be called Mate 20 instead of Mate 11. If a new trademark by the worlds third largest phone maker in the European Union is to be believed than the upcoming Mate will not be called Mate 11. This, in particular also happened with the P20 series this year. When Huawei launched the P10 last year, the next logical step would be to launch a P11 this year. But, instead, now we have a P20.

Furthermore, Huawei has gone a step further and got itself fixed for nine more years of trademarks with Mate 30, Mate 40, Mate 50, Mate 60, Mate 70, Mate 80 and Mate 90 monikers. That’s as far as the series branding is concerned. There is little knowledge about the actual calibre of the upcoming flagship. If history is any indication, Huawei should debut a brand new flagship chipset – the Kirin 980 with the Mate 20. Moreover, we could see an 8GB variant as the Honor 10 GT now has the first ever 8GB on a Huawei smartphone. 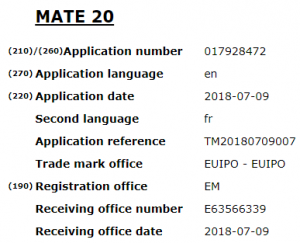 Also, Mate 20 may see the introduction of OLED panels that we presume Huawei will fit on the Note 10 as well. Like always, Huawei will have at least three variants of the Mate 20. The Mate 10 series launched in October last year. Hence, it is reasonable to expect the Mate 20 around the same time thus year.