Honor, Huawei’s smartphones sub-brand recently released a product launch invite for August 30th at the IFA 2018 in Berlin,  where the Honor Note 10 might be unveiled. However, the latest scoop from Honor’s Weibo page reveals the Honor Note 10 might first be unveiled in China before making a Global debut at the IFA 2018 in Berlin.

The brand via a Weibo post has announced it will unveil the Honor Note 10 on July 31 in Beijing, China, before heading to IFA in Berlin on August 30 as we revealed earlier on. The post says we should prepare for an AI flagship with a big screen that will arrive in just 10 days.

Previous leaks and rumors have revealed that the Honor Note 10 will come with a mammoth 6.9″ sized display, comparable to the recently unveiled Mi Max 3 from Xiaomi, however, the Honor Note 10 will arrive as a flagship device and not a mid-range and will not include the notch on the Mi Max 3 display. Under the hood, the device is expected to pack a HiSilicon Kirin 970 chipset at its core coupled with up to 8GB of RAM and 128GB of storage, while reports also have it the device might come with a mammoth-sized 6000mAh battery. 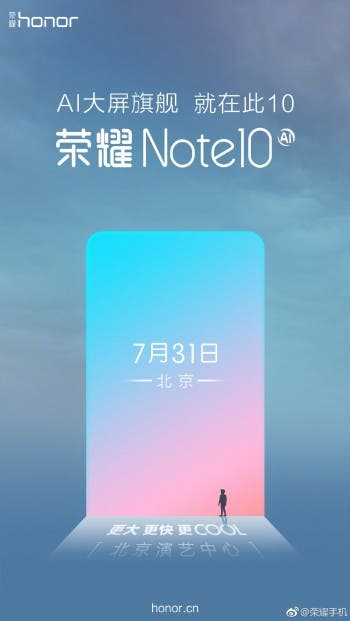