Every year Microsoft holds a conference called Inspire to showcase the company’s plans for software for its partners. The last Inspire conference happened during the past week and one of the biggest apparition of this edition involved the company’s applications developed for Android and iOS.

Microsoft’s CEO Satya Nadella took the stage to display the company’s apps running on both iOS and Android devices but switched its focus to the software developed by the Bill Gates company. Isn’t a secret anymore that Microsoft completely wiped its plans for the mobile device world, and with the demise of Windows Phone and its series of Microsoft Lumia devices, the company now invests in developing software for the other successful mobile platforms. 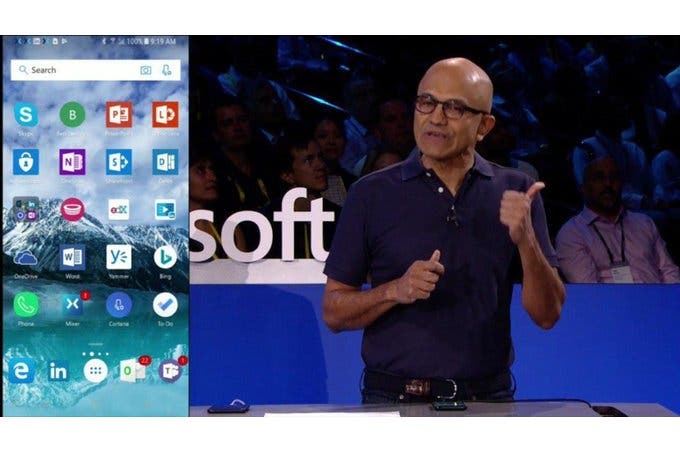 Curiously, many of the old Windows Phone users already switched to Android smartphones due to the OS versatility alongside the offer of Microsoft applications on the PlayStore. While iOS also offer the same options, they are less flexible than its counterpart on Google’s mobile software.

Satya Nadella called both platforms an, “Endpoint for Microsoft 365” and showed default environments where the user can switch the stock offering for the Microsoft’s applications. The company’s CEO detailed some applications such as the recently released Edge Browser, Launcher, Outlook, Teams, LinkedIn, and Yammer. Worth mentioning that the US-based company has been building a strong relationship with Samsung, by selling its pre-loaded package of applications on the South-Korean flagships.

Since Microsoft supposedly scrapped its plans for its new mobile device, a.k.a Surface Phone, it’s natural to see the company putting some effort into the current successful Mobile Platforms, let’s see if in 2019 the company will have something to replace the old Windows Phone.

Previous Nokia X5 will be available outside China, re-branded to Nokia 5.1 Plus