The Zeblaze Vibe 3 isn’t what I’d usually call a “smartwatch” but more something like a real old-school sports watch with added smart features. This isn’t a negative thing though, as you’ll learn throughout the review, since it keeps battery usage to the minimum, thus allowing for some pretty incredible autonomy. Does this make it a watch worth buying? Keep reading to find out! 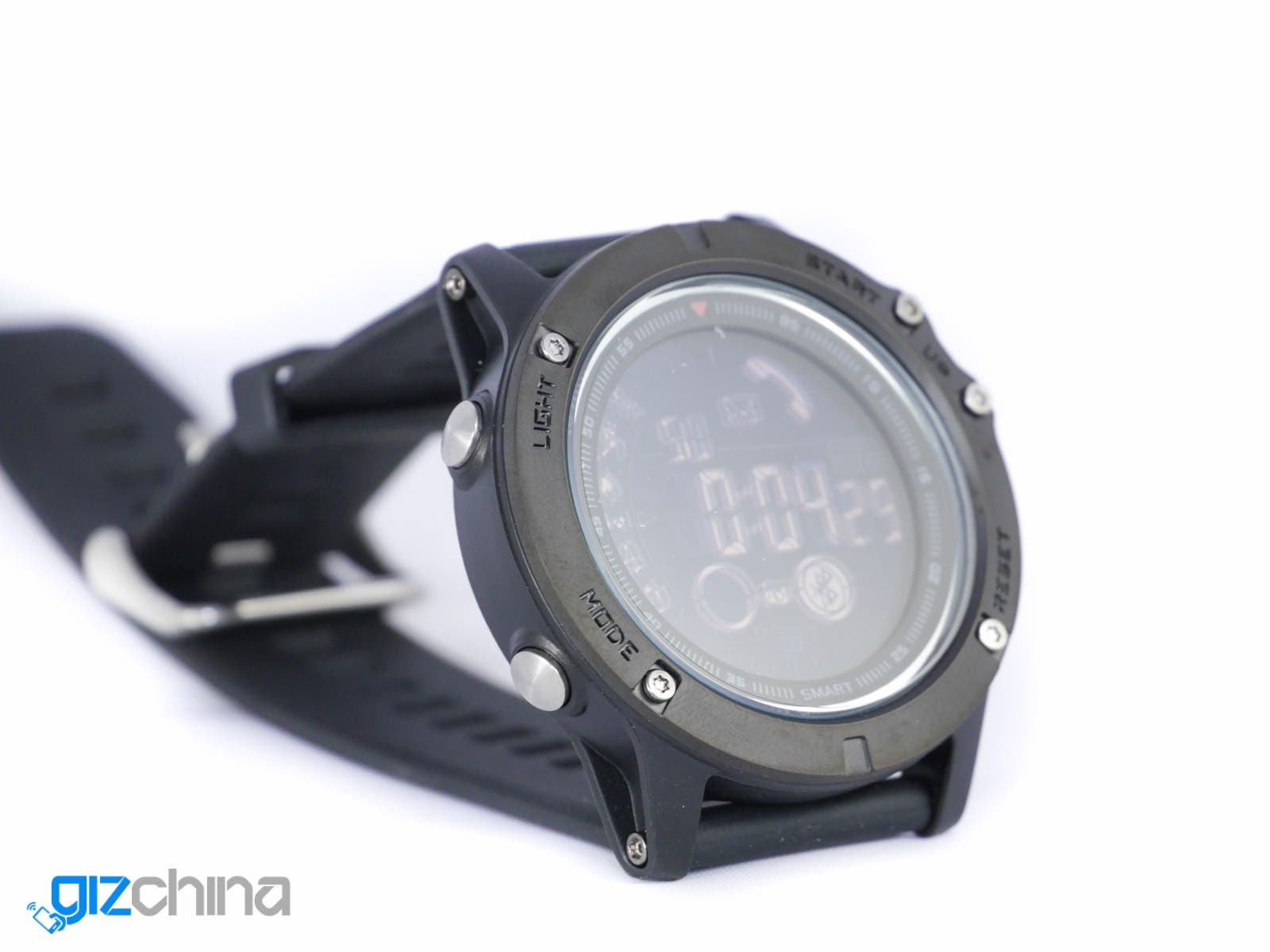 There really isn’t much to say as far as design goes. Most of you have probably owned one of those plastic / stainless steel sport watches in your lives, so you have some idea on how it’d look and feel in person. The only thing I can point out, is the thicker than usual watch case, but that’s common on all “smart” watches, you have to put the chips and sensors somewhere in there!

The watch case itself is also made of premium 316L stainless steel with a drilling carbon coating and a dial size of 50mm. Meanwhile on the top we find a Corning Gorilla Glass 4 to protect the display. 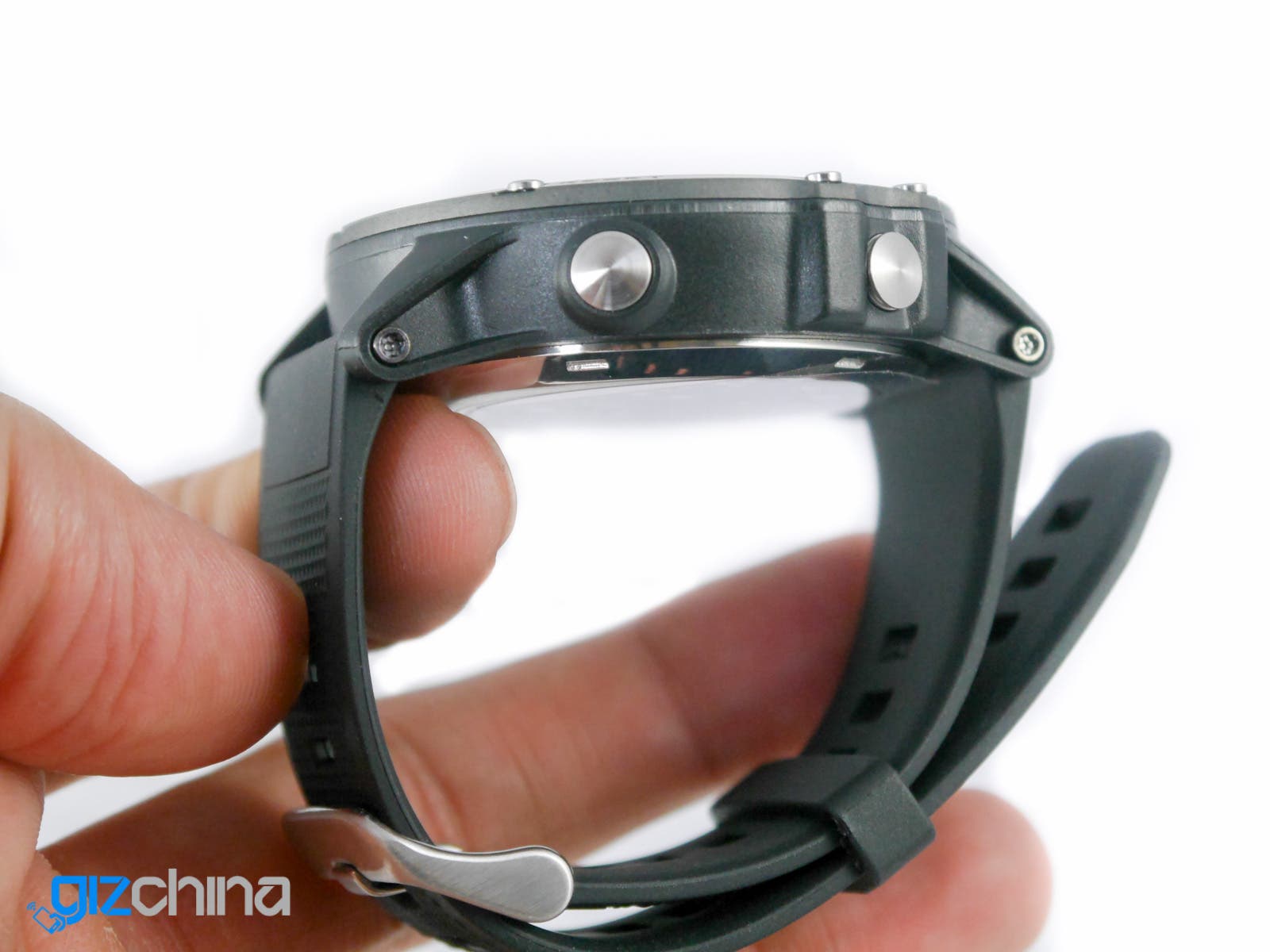 What’s the real selling point for the watch is its durability though. The Zeblaze Vibe 3 does indeed come with an IP67 certification, which means you can wear it underwater at up to 50 meters / 164ft. So, no more worries about getting it damaged in rainy days, while swimming or sweating on a long run. 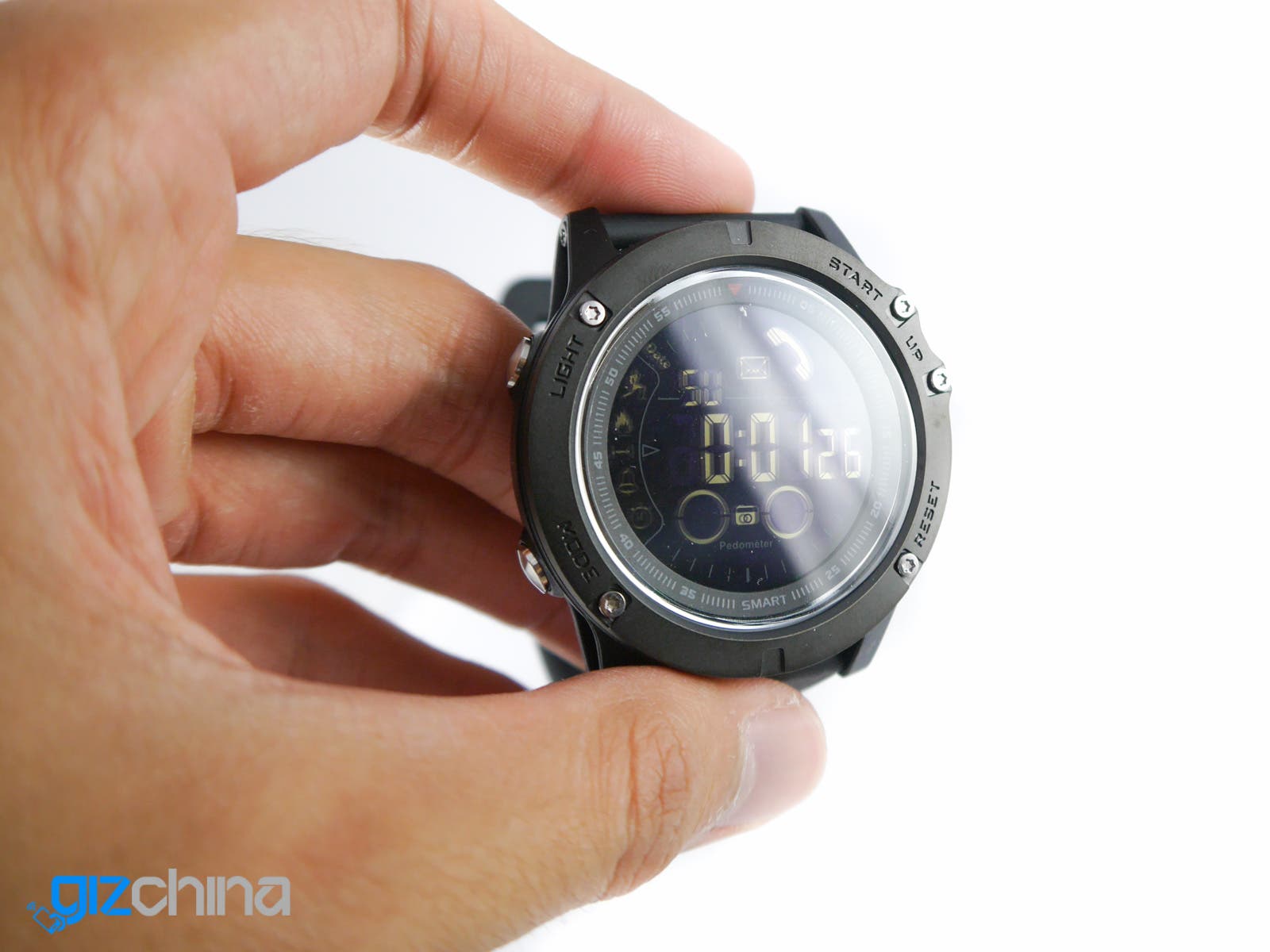 The display on the Vibe 3 is much bigger than its predecessors. It does indeed pack a big 1.24-inch FSTN display, which makes it look like, once again, those older sports watches.

That has a positive aspect though: it allows the watch to be extra visible outside. Plus the display is always ON, so no need to push a button or raise the wrist in a perfect motion to wake it up. Additionally, there’s a specific button to turn on the back-light, which you use when you’re in darker environments, just like the good old times.

Being a very basic smartwatch, the Zeblaze Vibe 3 doesn’t pack too many features, yet I believe there are plenty enough for the sport people out there that only need a device to keep track of their steps and get notifications.

The Vibe 3 does that very well with its built-in steps, calories and distance walked tracking. If you connect it to a smartphone through the Bluetooth 4.0 module, you then also get notifications from a various numbers of apps, calls and messages. In addition to that, the watch can be used to set up alerts and as a remote shutter button for your camera. 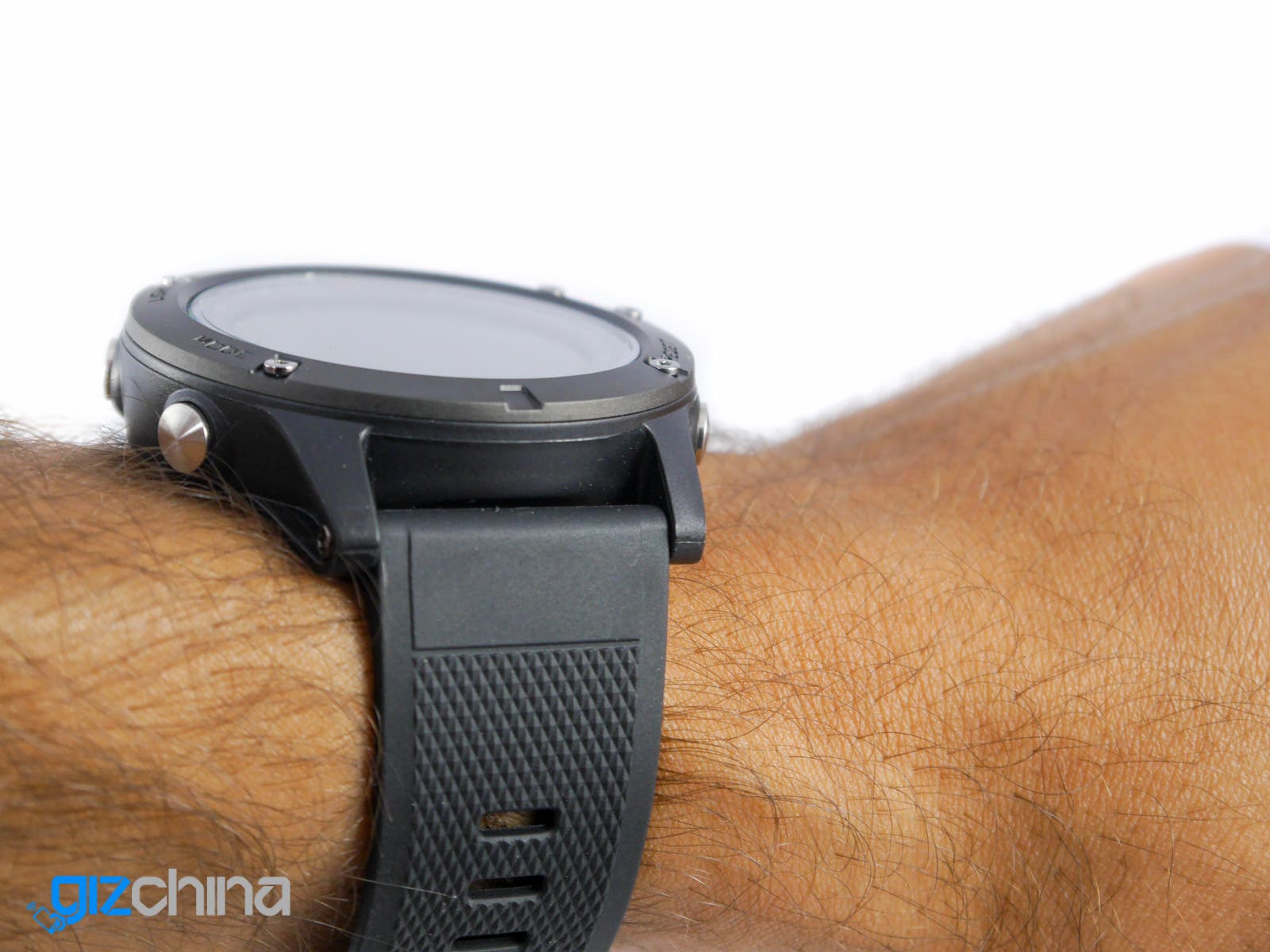 If we had to pick a killing feature of the Vibe 3, it would definitely be its battery. With its energy efficient display and a massive 610mAh battery capacity, the watch does indeed sport a 24 months under normal use battery life, and even up to 33 months if used in energy saving mode.

This is one of those watches you don’t have to charge every other day. Well, actually, you cannot charge this watch at all as there’s no power plug. The battery gets changed the old fashion way, by going to a watch shop and paying a couple bucks or less for the job. That said, you’ll need to do that after over 2 years you’ve been using the watch, which I’m not sure it’s very likely to happen given how quickly we get bored of things nowadays. The software is what you’d usually find along with an affordable smartwatch. It’s very basic but it works; you’ll struggle a bit at the beginning to connect it through Bluetooth but you’ll manage.

The app shows all the data sent from the watch, going from the steps to the distance and calories burnt. It’ll keep track of the stats for at least one month.

Once paired with the watch, the app will be able to send you notifications for incoming calls and messages, as well as alerts from QQ, Wechat, Twitter, Faceboo, WhatsApp and Skype. So pretty much almost anything you can ask for. 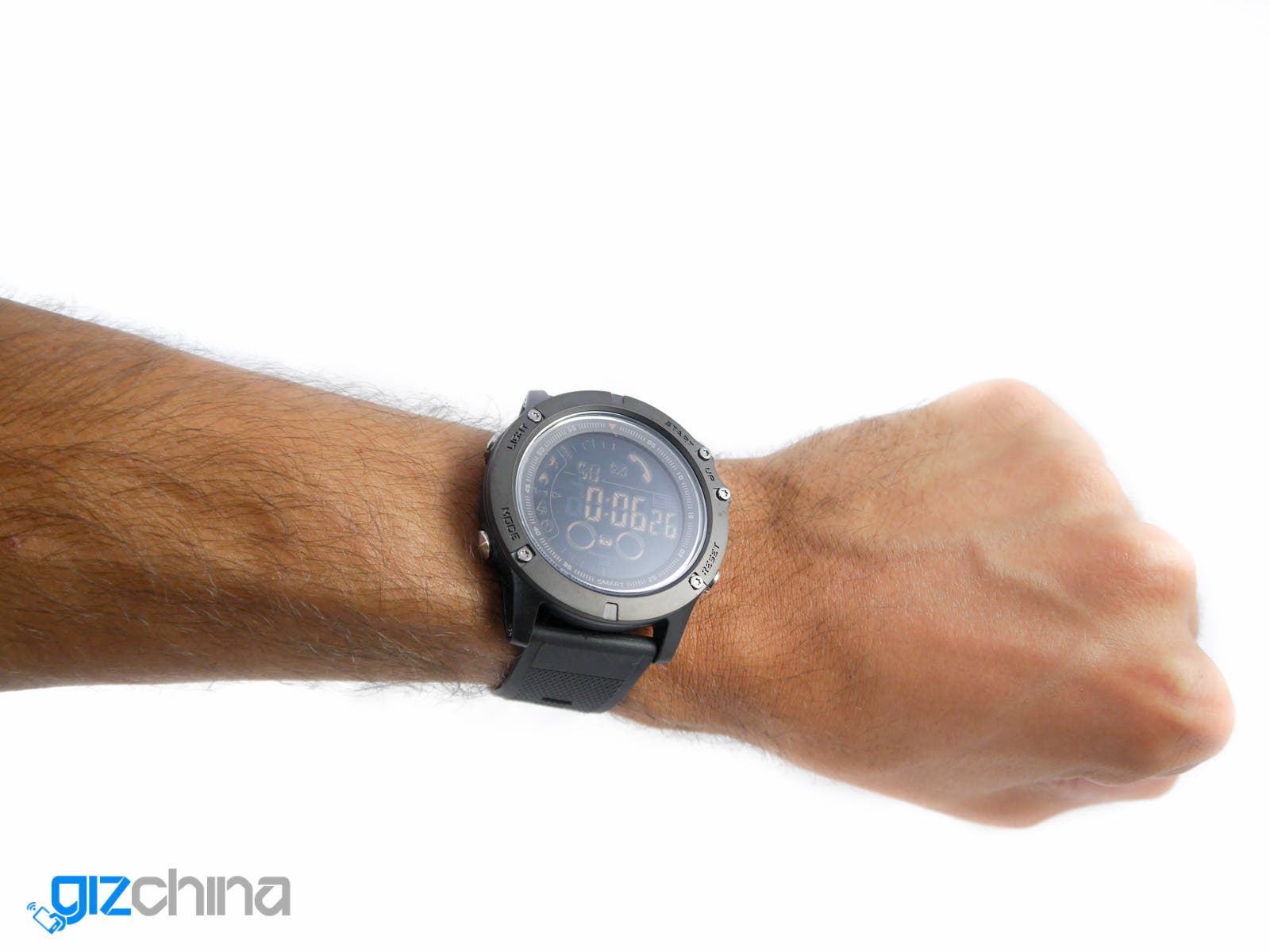 It’s really hard to give a final verdict for the Zeblaze Vibe 3. The watch does everything it promises, it’s durable and waterproof, very visible outdoors and it has an incredible autonomy. On the other side, some may not like its design as it doesn’t look too modern and it doesn’t have a fancy AMOLED display and whatnot. That said, if you’re more of a practical person and you’ve always liked sports watches, then this is your best bet; also given it’s ridiculously low price tag of around $25.

Buy the Zeblaze Vibe 3 on the official AliExpress Store. Learn more about Zeblaze on their official Facebook page.

Next Huawei Kirin 980 May Arrive On August 31