Welcome to another… episode of “how to enjoy good battery life with your smartphone”, starring… Blackview BV5800 Pro obviously! Blackview’s devices have been impressing me lately, and as a result I’ve begun to look forward to the company’s next releases. With this, I now have the Blackview BV5800 Pro in my hands, and it’s ready for a full review.

Let’s meet a budget phone that boasts a huge battery inside but still has the looks to impress some users who prefer decent battery life over performance. So, how does the Blackview BV5800 Pro fare in everyday usage?

We’d like to thank Blackview for lending us a review unit of the BV5800 Pro. 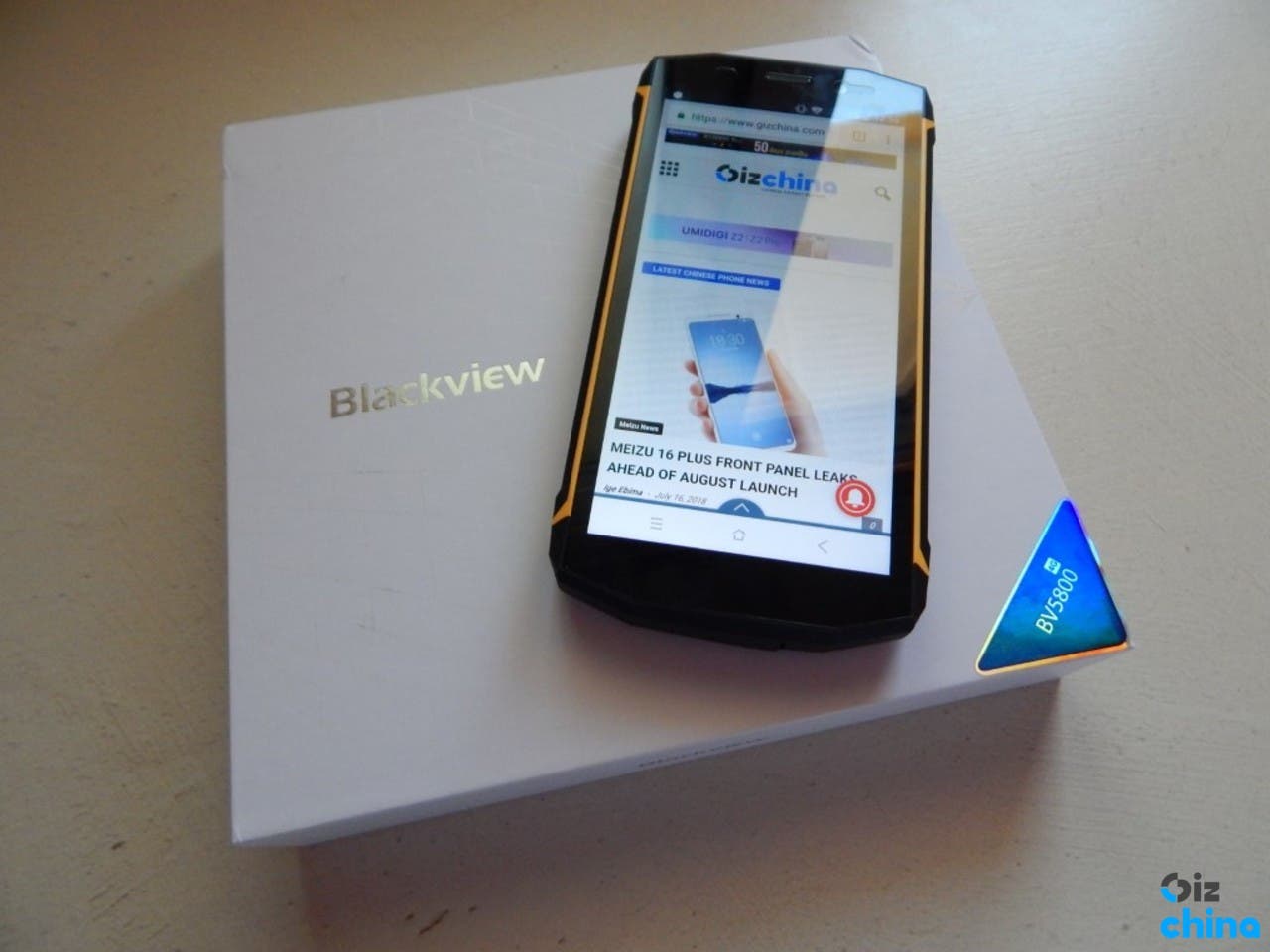 The BV5800 Pro is a device designed to fit into a niche market, that market being the rugged design market. As such, the BV5800 Pro features all the hallmarks of a rugged phone like a rubberized design, metal everywhere and a covers for every slot and socket.

As a result of this, the device looks very unique but also not too practical. It’s quite heavy at 250g, but it’s also incredibly solid and tough. It’s got thick bezels around the display, but this only makes the Gorilla Glass 3 coated display even safer. The thing is thick and chunky for a 5,5-inch device at 157mm x78.9mm x 15 mm, but it makes up by feeling substantial in the hand. 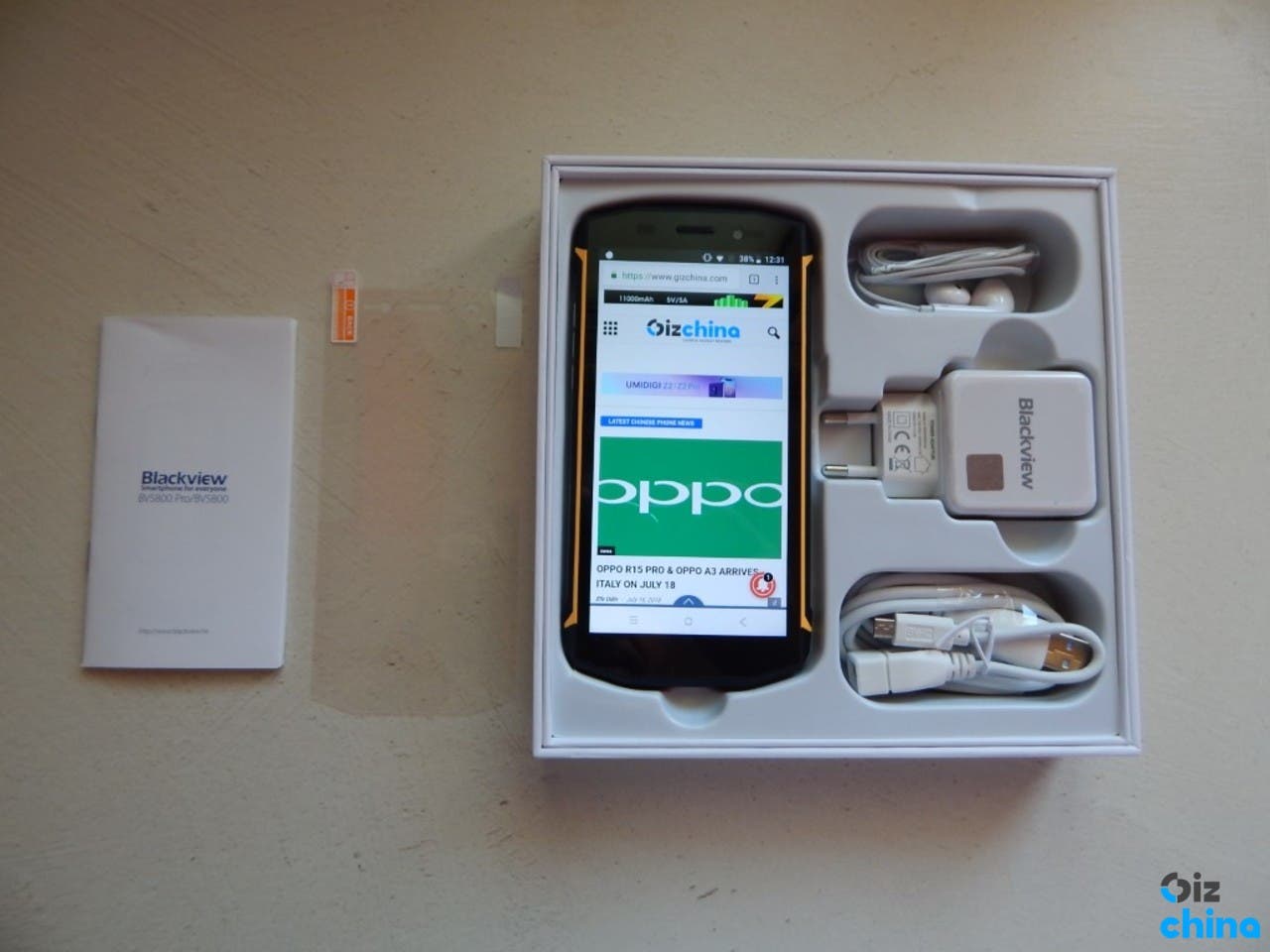 The build quality here is very good as far as I’m concerned. This device is made up of a huge and solid CNC Metal frame, which makes it so incredibly solid. The parts that aren’t metal are rubberized, meaning they’ll be more shock resistant and are easier to grip. 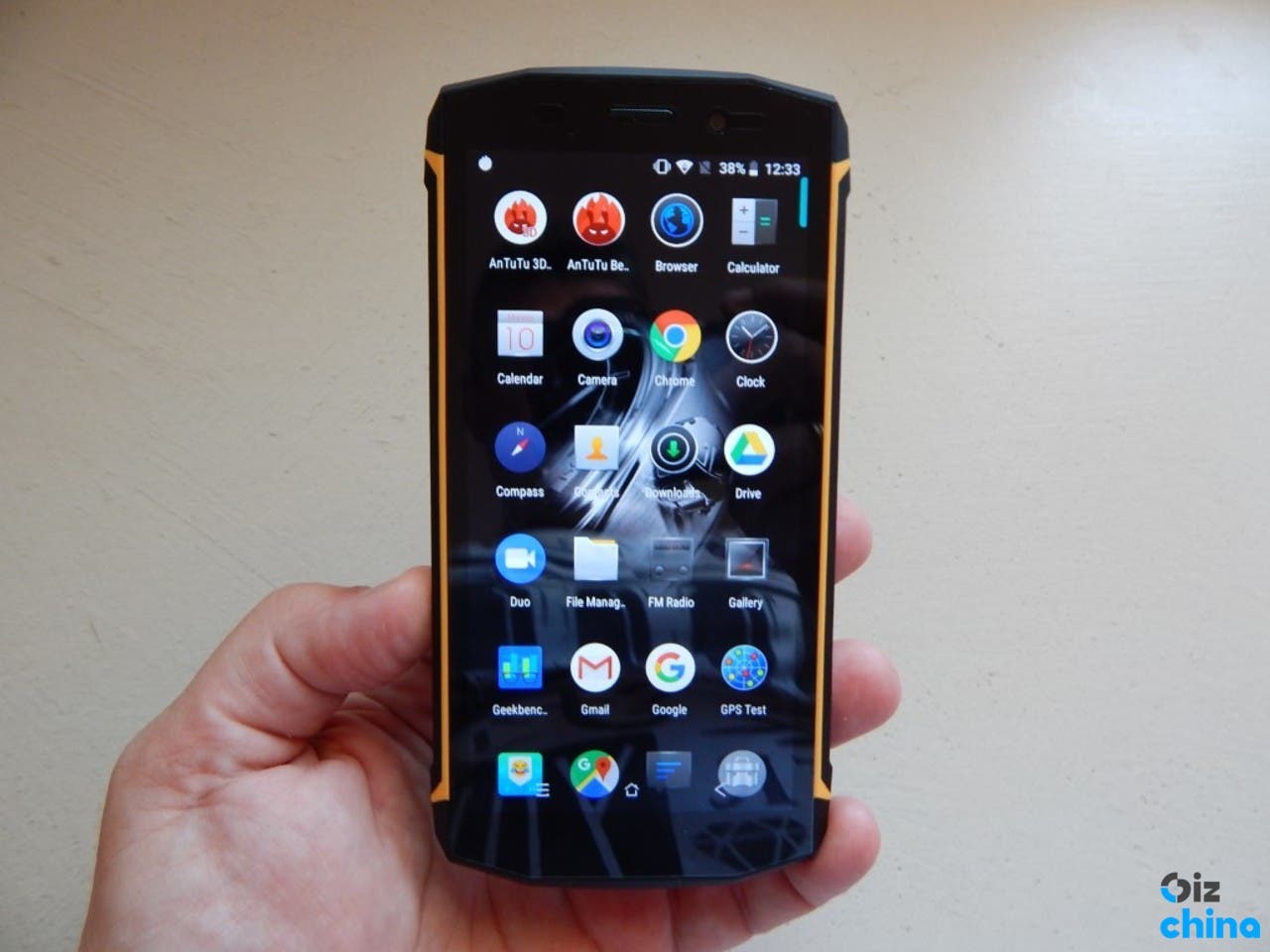 Really, this design comes down to whether you like these types of devices or not.
In terms of ports and slots, the device comes with a dual micro SIM port and a microSD card slot. 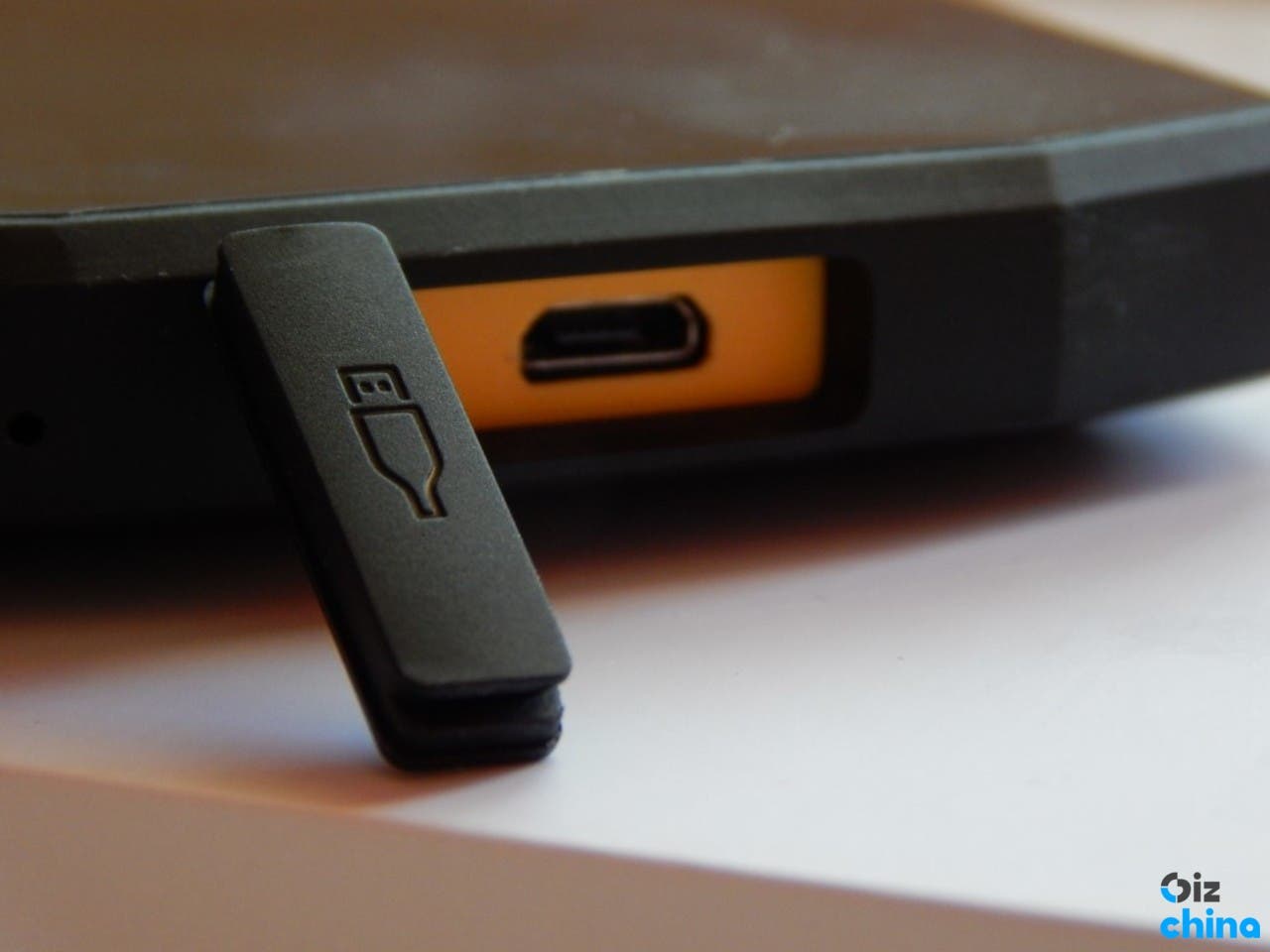 There are also the power button and volume rockers on the right, and on the bottom you’ll find the micro USB 2.0 slot. The slot is deep in the phone, which means the cable you use needs to have a longer head or it won’t work. 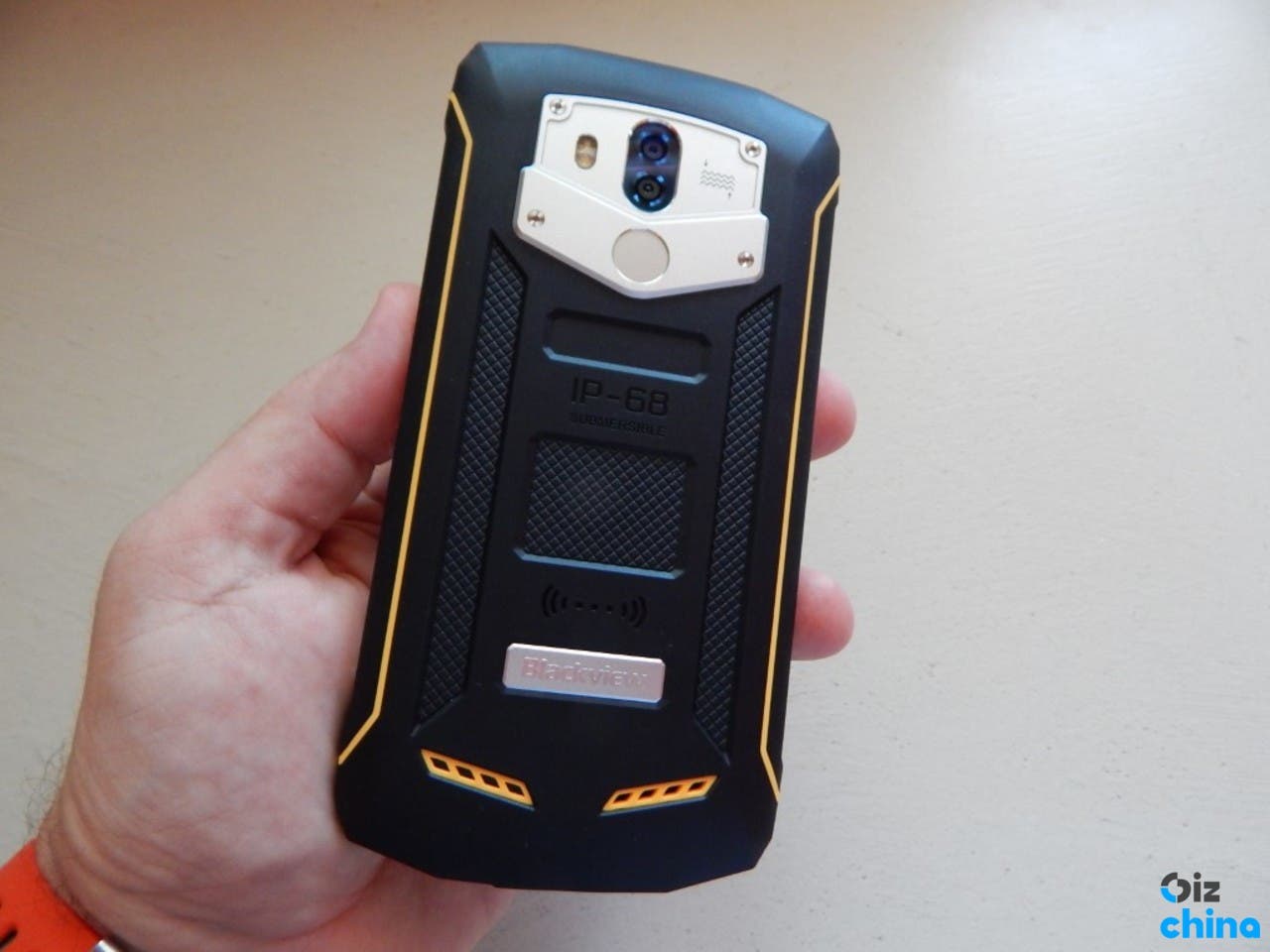 The top features a 3.5mm headphone jack, but because it’s deep in the phone, most earbuds and headphones might not work with them, which is very disappointing. 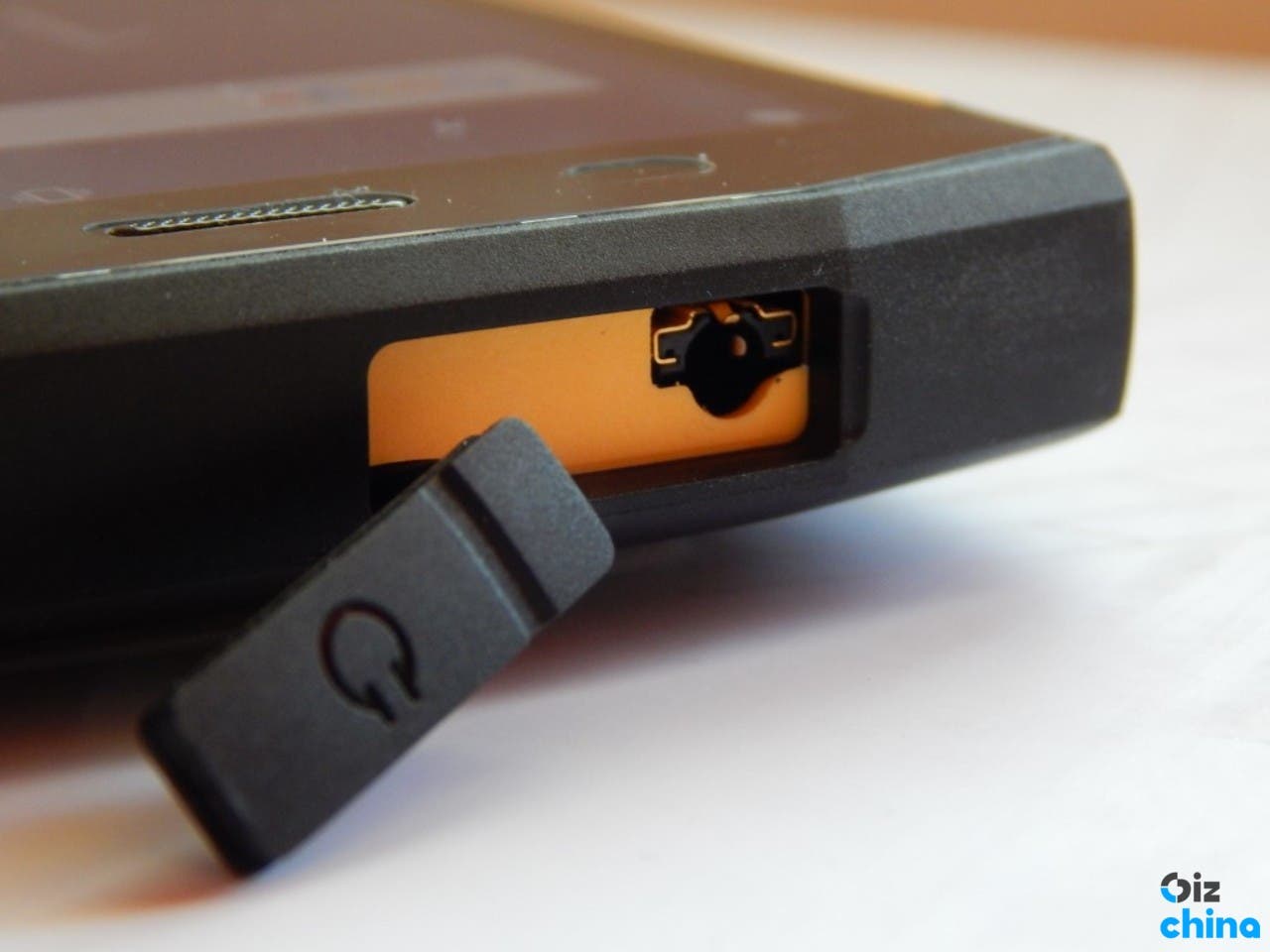 Also of interest is the small oneclick button right under the power button and volume rockers on the right. It can be setup to perform simple actions with a single press, it’s pretty nifty. 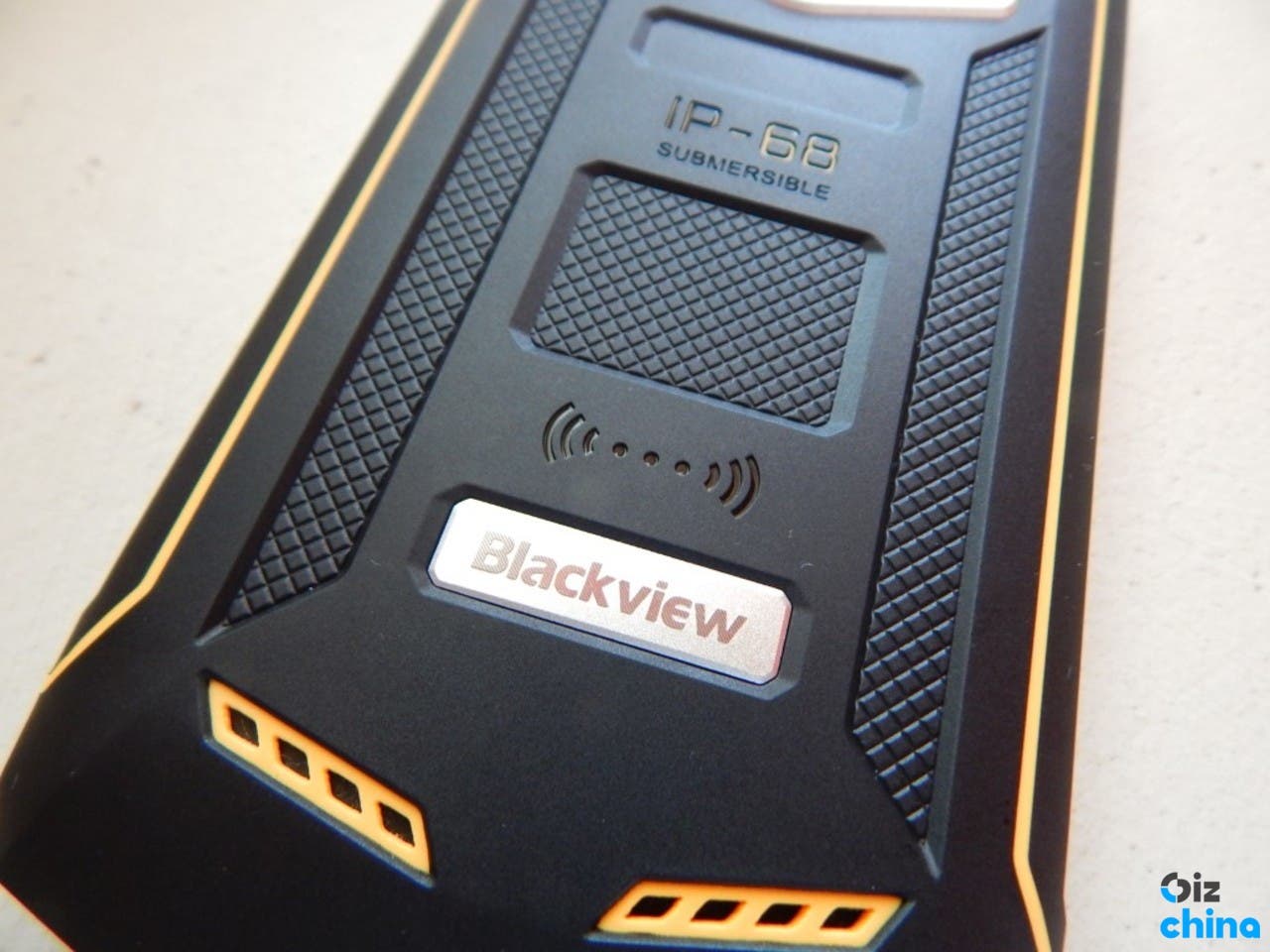 If it’s just build quality you’re after however, the BV5800 Pro stands tall above the rest. I’ve thrown it onto a cement wall multiple times, and it’s barely scratched. This is a device that you could literally use as a weapon, it’s simply that tough. Also, it’s water resistant and dust resistant with an IP68 rating, which is always good. 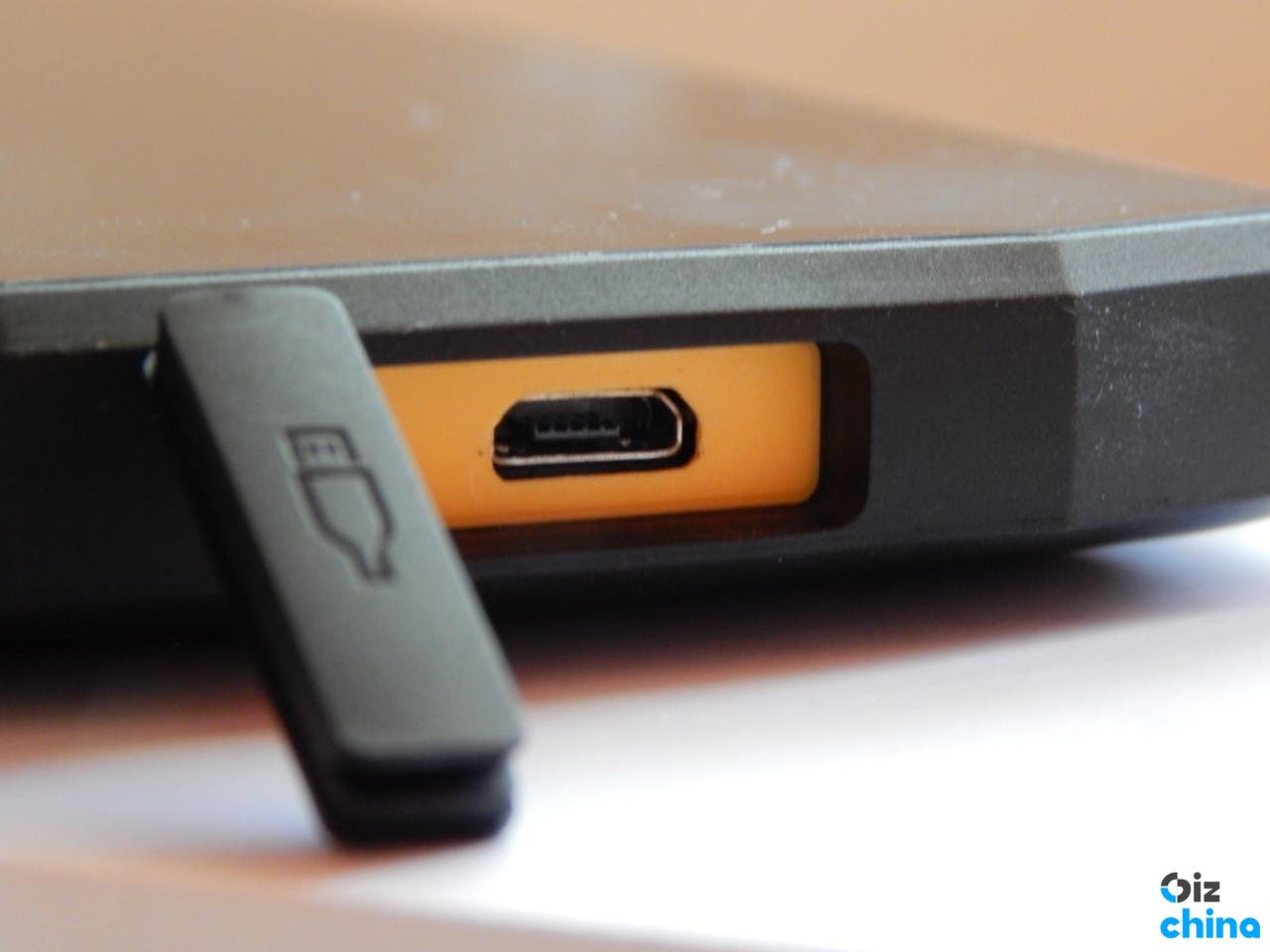 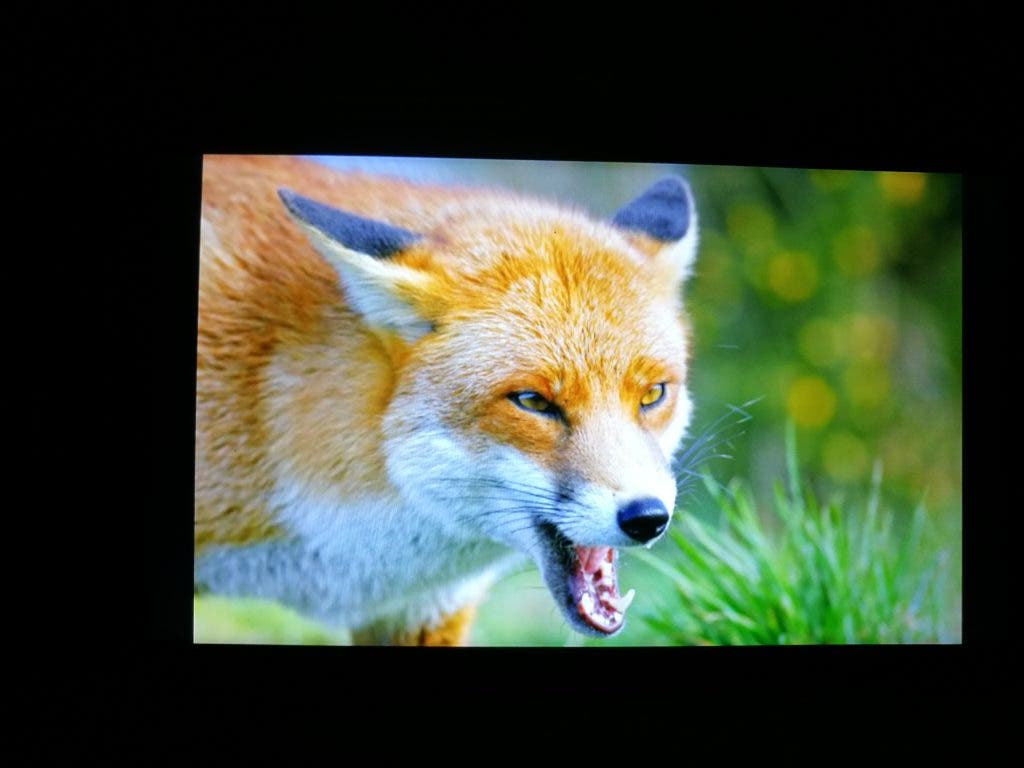 The Blackview BV5800 Pro has a 5,5-inch 1440 x 720 pixels screen, and it’s once again an average quality panel for the device. The display is somewhat vibrant and accurate, just like any budget display should be. Sunlight visibility is good, though you’ll have to crank it up to full brightness in harsh sunlight. 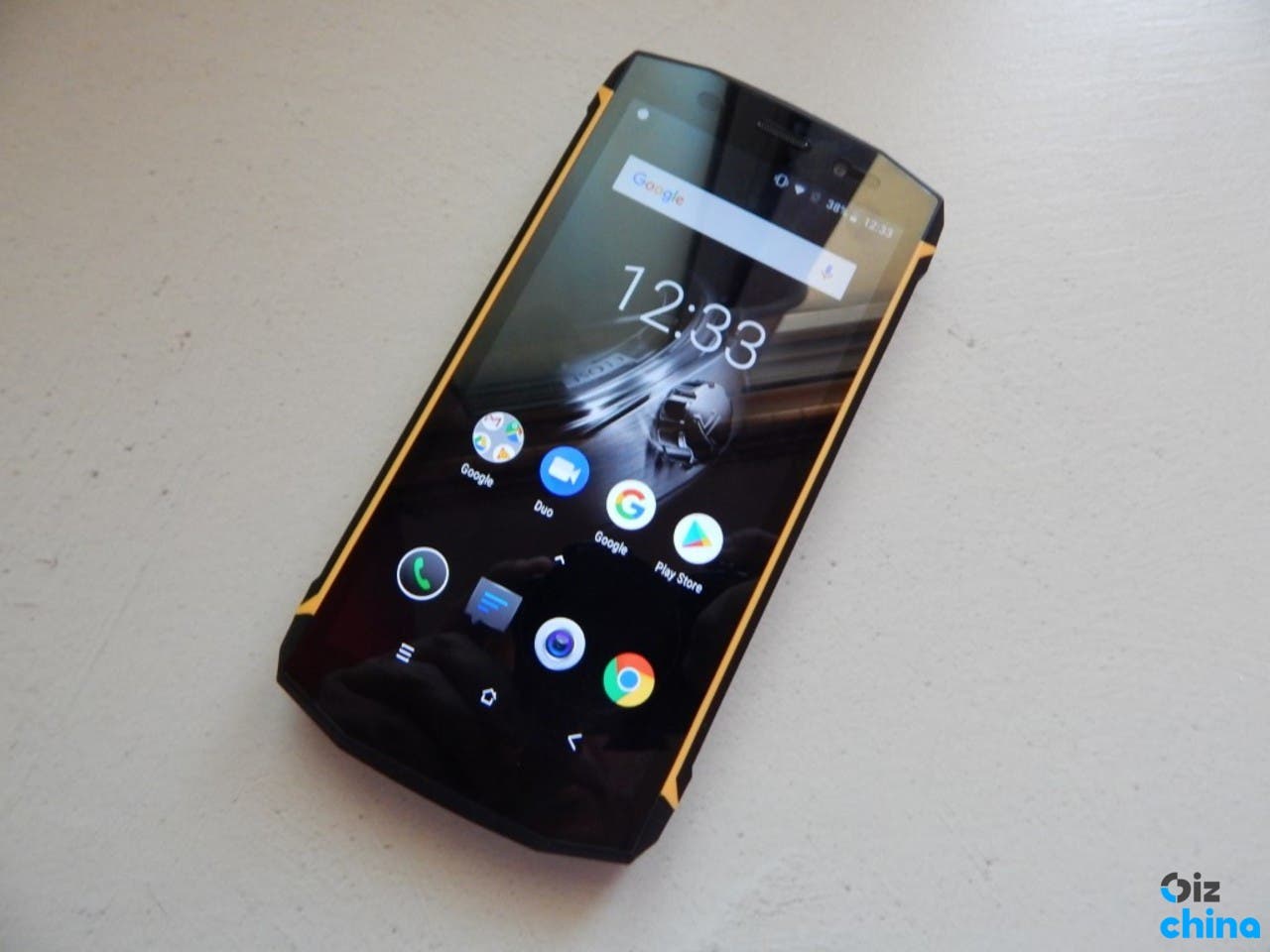 Viewing angles are very good, though they are somewhat hampered by the thick bezels around the display. While they do protect the device, they also make the viewing experience less immersive. This however keeps the display extremely safe from danger, so it’s up to you to decide if it’s an acceptable trade off. 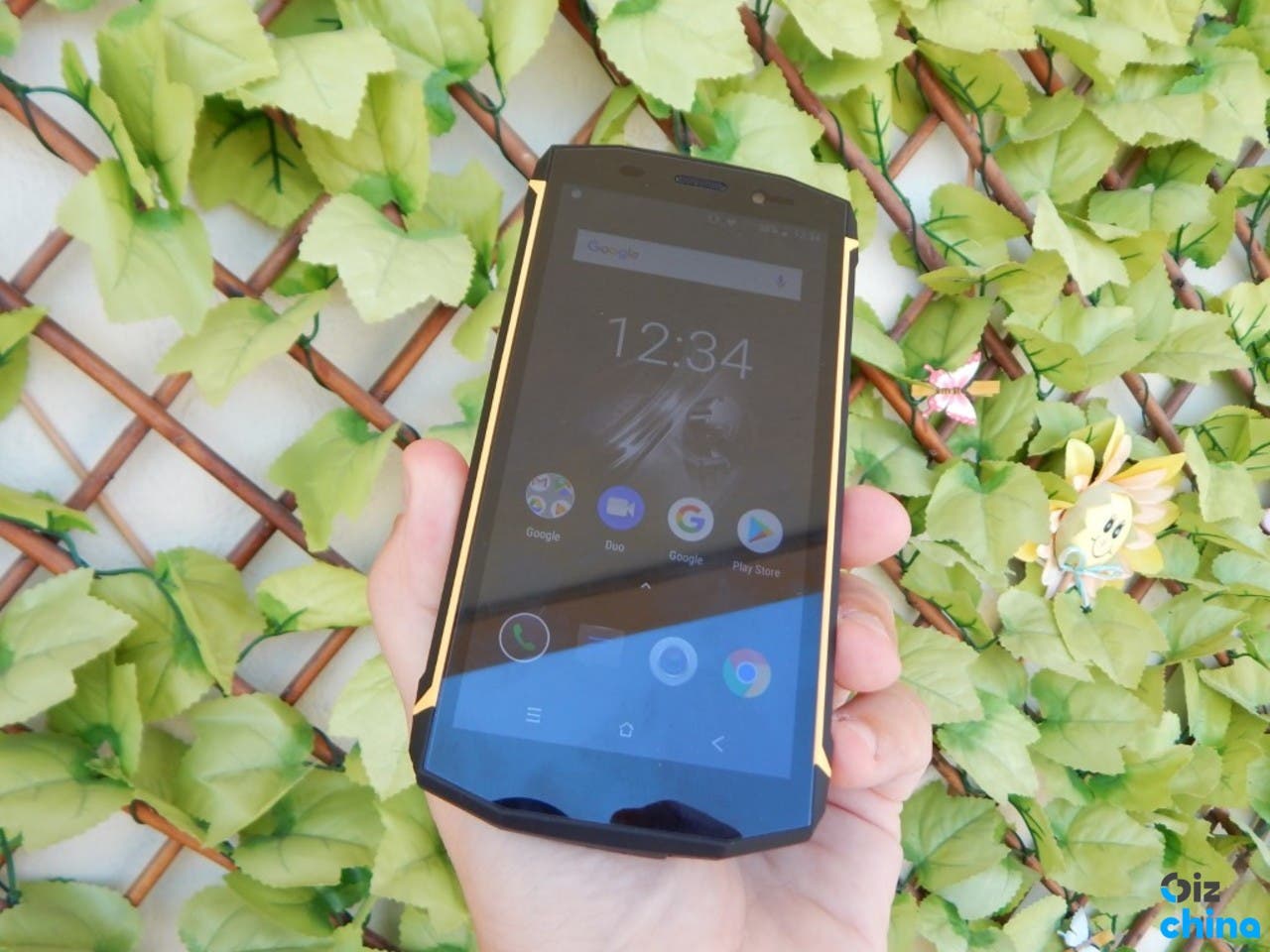 So in conclusion, the BV5800 Pro has a decent display, but nothing more than this. It’s actually quite surprising to find a display like this on a rugged device, though it’s much appreciated. Hopefully future rugged devices will have displays like these instead of the almost TFT looking things a majority of them have.

Blackview Launcher makes another appearance here, and once again it’s pretty much stock Android with a skin on top and no app drawer. The BV5800 Pro throws out the old icon design for a new Huawei Mate 8 look, which wasn’t really much of an improvement, so I threw on Nova Launcher.

The settings menu has some options for unlocking the phone with gestures, but they’re not really all too useful when you consider the device fingerprint sensor. There’s also an option to setup the oneclick button on the bottom right. This allows you to configure what you want it to do.

The oneclick button can do simple tasks like start up your flashlight with a single press or take a screenshot with a double press. You can also set it to start applications, so the possibilities are endless, and it’s pretty useful. Aside from that, everything else is pretty much stock Android 8.1. 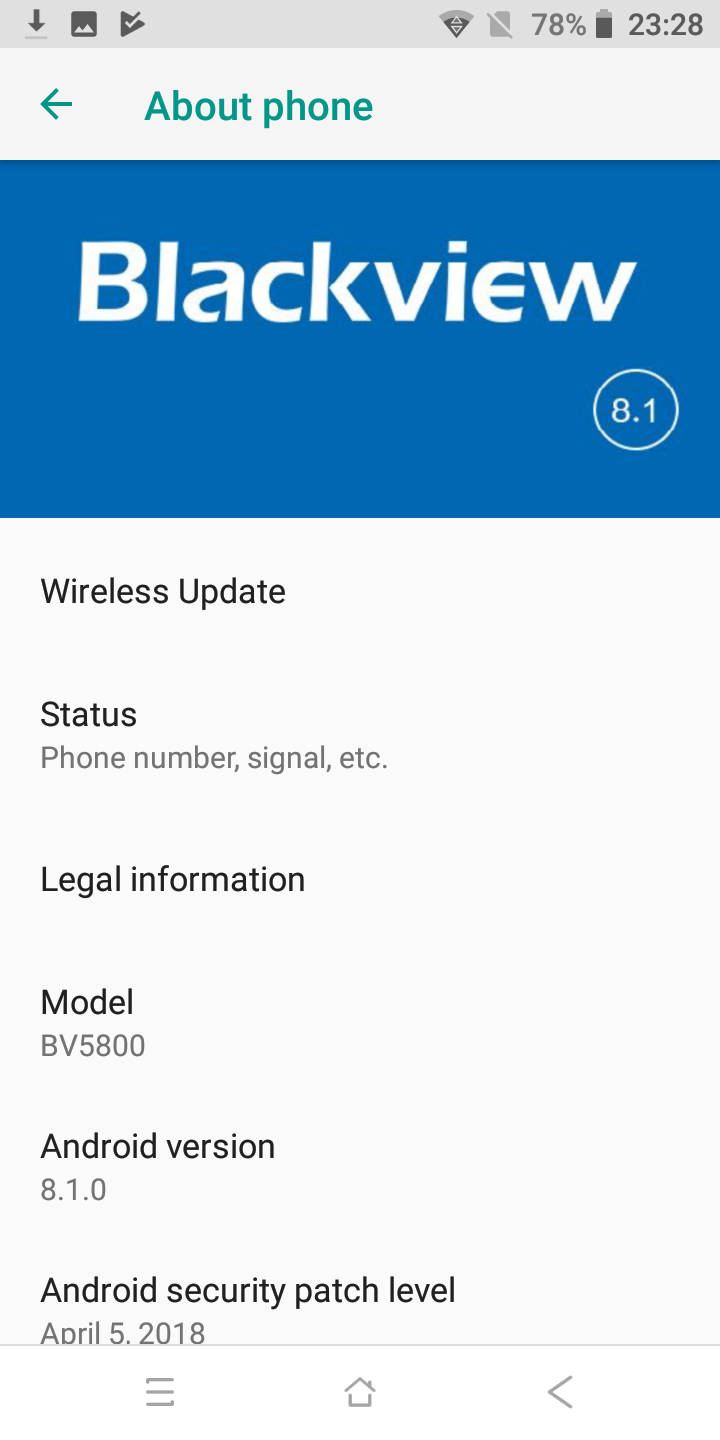 The Blackview BV5800 Pro comes with a MTK6739 chipset and just 2GB of RAM. This is the exact same setup one would expect from a very budget Android device, so… be prepared for slow UI experience, typical performance and average multitasking features.

Opening multiple apps at the same time was hmm a bit of a pain when trying to use more than 4-5 apps simultaneously, but I guess that’s something one can expect from a 2GB RAM smartphone (with a skinned UI) nowadays. 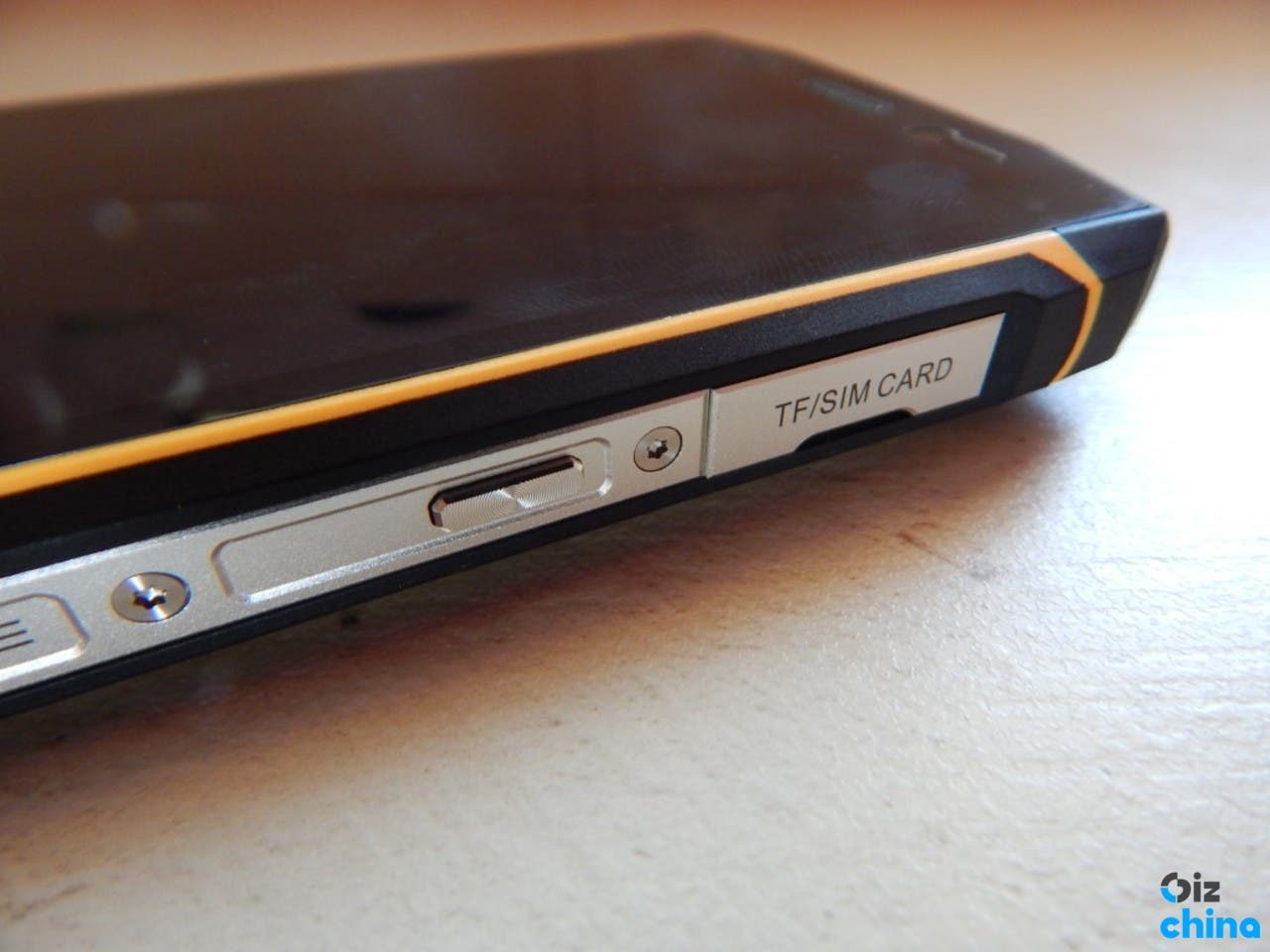 Moving onto gaming, The BV5800 Pro cannot really impress anyone – you can easily understand this. Playing simple games like Tetris and Prune proved to be no challenge for the device, however more graphic intensive games like NOVA 3 caused some slowdowns, that somewhat affected my enjoyment of the game.

Overall, the performance of the Blackview BV5800 Pro is adequate. The combination of the MTK6739 and just 2GB RAM provides a low-end user experience, with everything being somewhat laggy if you put pressure on the device. It’s not the fastest device, but it provides reliable performance when used as a budget smartphone. It’s not a phone that game lovers or professional users will choose.

The Blackview BV5800 Pro features a 5,580mAh battery which is a impressive size for a 5,5-inch device. In terms of actual performance, it delivers MORE than just fine. The BV5800 Pro managed to get through almost 2,5 days, even with intensive usage.

With 20 minutes of gaming and an hour of social media as well as mobile data constantly turned on and 60% brightness, the phone managed to get nearly 6 hours of screen on time, which is quite good. 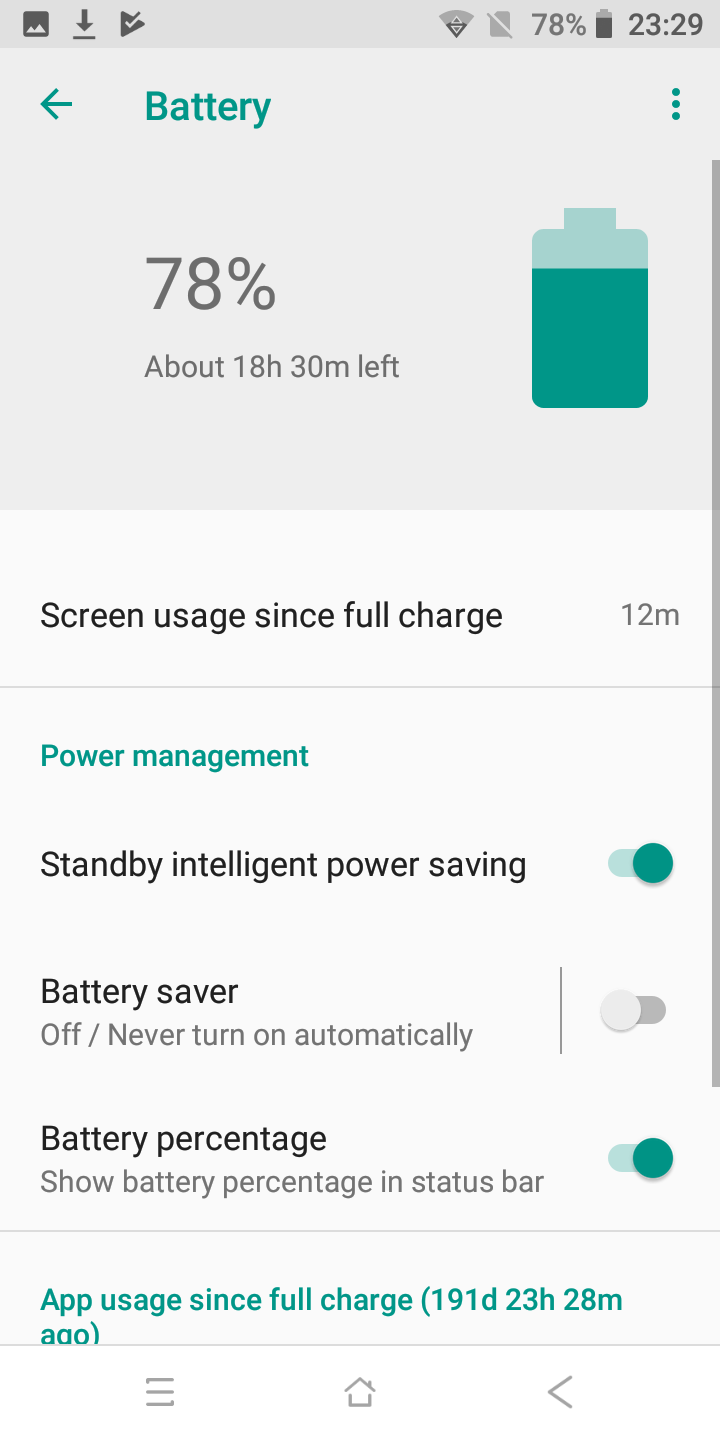 The BV5800 Pro also charges surprisingly quick thanks to that 5V2A charger. It can go from 0% to 100% in just over an hour, which is fairly impressive and the add on of wireless charging capability is surely a plus! So to summarize, the Blackview BV5800 Pro is great in terms of longevity and charging speeds.

As is the case for many rugged devices, the sound quality is its downfall. The main speaker is adequately loud, but crank up the volume and you’ll start to hear crackling, blurriness and distortion. The reason for this is the water resistant nature of these devices, which reduces the quality of the speaker.

Following that, the in-ear speaker is also not really that good. It’s clear enough that you can understand what the person is saying, though it becomes harder once you’re in a public area with a lot of people. This is typical of rugged devices, but it’s still a con nonetheless. 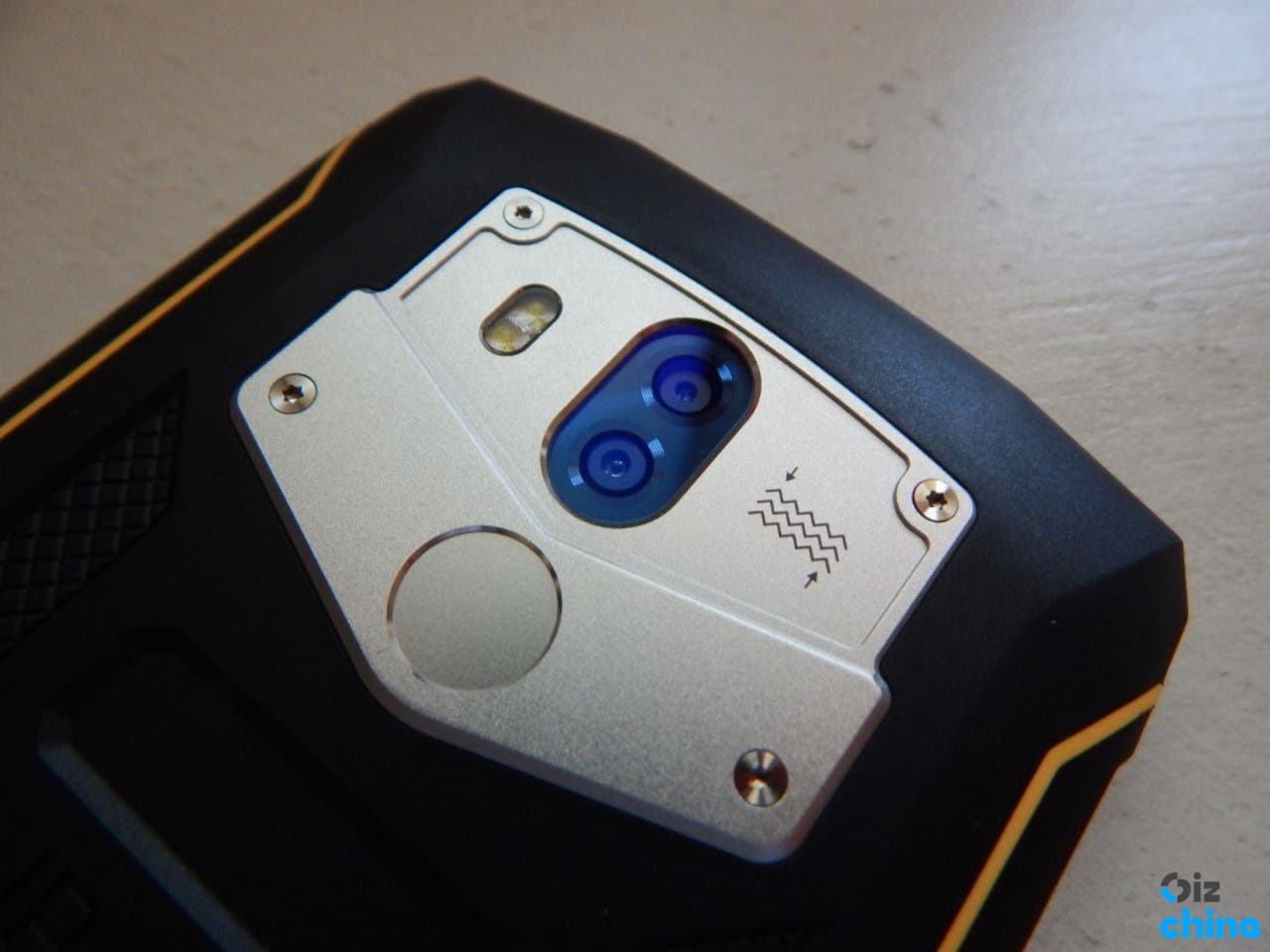 The Blackview BV5800 Pro’s dual camera is, at its best, decent. The phone suffers from the same problem most mid-range smartphones suffer from, the cameras rarely stand out among the competition. Their cameras are fully usable, but they aren’t going to be the reason you buy the device.

The device can snap images quickly thanks to low shutter lag, but details get blurred out fairly often. Highlights can get overblown easily, requiring quite a bit of manual readjustment to get a decent shot. The lack of OIS also means that it’s tough to take a steady image.

Video recording doesn’t fare much better either. Videos are incredibly shaky and lack detail. The colors are also muted, which sometimes makes things look lifeless and uninspiring. Rugged devices aren’t known for their cameras, though I was still hoping for more.

Back to the positives, the Blackview BV5800 Pro definitely impresses in connectivity. The GPS locked-on quickly and managed to hold a strong connection every time I needed it, and mobile reception was fantastic, as I could get mobile reception from the middle of a bustling shopping mall.

Bluetooth works well, and Hotknot also works though I’m not sure why you’d use it over Bluetooth. Everything ran as it should have and there weren’t any times where a problem with stop me from doing something. So in this case, the BV5800 Pro gets a thumbs up from me.

The Blackview BV5800 Pro is a solid rugged device, that is held back by the fact that it’s a budget smartphone aimed towards those who prefer a “die hard” phone but don’t have the budget to aim higher in the market. It offers impressive build quality, but now some of your headphones may not work and it gets some massive bezels. The display is tough, but the speakers suffer. This thing is made up of pros and cons, all of which boil up to the fact that it’s a rugged device. 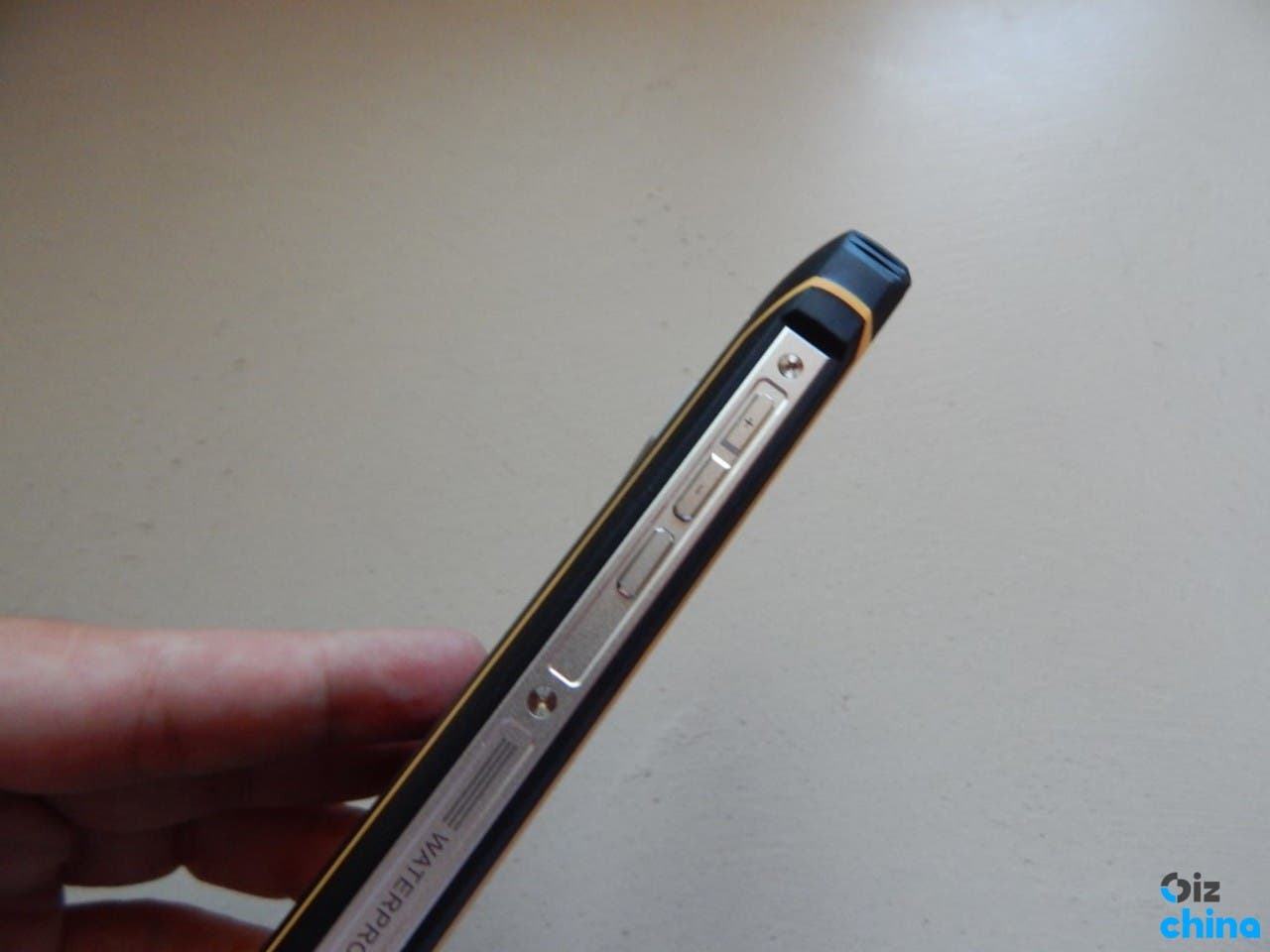