It’s always interesting to see how the Chinese companies are struggling in the international markets. For a long time, the phrase ‘Made in China’ has meant we are dealing with something cheap and poor quality. But everything has changed. For the smartphones specifically, almost all the innovations come from China. Plus, the Chinese smartphone makers design and launch relatively cheap smartphones. So they succeed in every market they enter. But what about the domestic market? Recently, a Chinese market research institute, namely, Sino released a comprehensive report concerning the Chinese smartphone market sales in the first half of 2018. 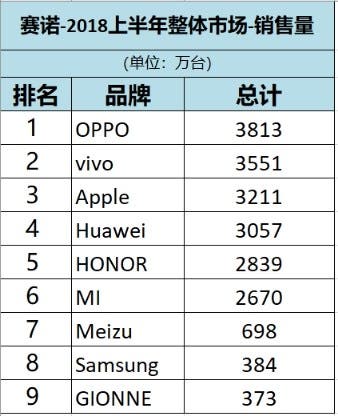 According to the report, OPPO leads the list. It is followed by VIVO and Apple. Surprisingly, the Cupertino-based manufacturer dropped to the third position. Thus it has begun losing its dominating position in the world’s largest market as well, just like the case with India.

Well, as the data shows, OPPO has shipped 38.13 million units in the first half of 2018. Its closest rivals shipped 35.51 million and 32.11 million units. Huawei and its most successful e-brand, Honor ranked fourth and fifth, respectively. But what’s amazing, the total sales volume of these two is 58.96 million units. So if considering Honor belongs to Huawei, we can state it is an absolute leader. Anyway, Xiaomi is the sixth with sales of 26.7 million units. Starting from the seventh place, all smartphone makers sold less than 10 million units. Meizu, Samsung, and Gionee ranked from seven to nine. 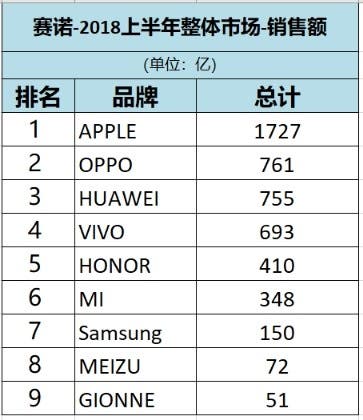 At this moment, Gionee is facing difficulties. So it may be acquired in the nearest future. We can’t predict how this will affect its performance in the domestic market. But it is expected the company will fall out of the top nine in the second half of the year. At the same time, Meizu will release the Meizu 16 on August 8. So there is every reason Meizu will improve its sales in the second half.