Ranging from design to global rollout plans, the Galaxy Note 9 has been dominating the news headlines for over three months, and it appears we are experiencing the climax of it right now. Notwithstanding a not too dramatic change in design, the Galaxy Note 9 is expected to pack some high-end features, including a 4000mAhbattery and a 128GB storage base variant, and this won’t come without a spectacular consequence.

A leak from the ever-reliable WinFuture’s Roland Quandt earlier this month revealed the Korean Chaebol will jack up the Galaxy Note 9 pricing to a point considered the highest throughout the Note series existence. He further alleged the Galaxy Note 9 will be offered in two storage variant only – the 128GB and the 512GB variants which he says will cost $1230 and $1469 in the EU. region.

Now, a new leak from Indonesia appears to have corroborated Roland’s claims. A leaked pre-order poster first sighted by Slashleaks contains pricing info for just 2 storage variants for the device as well as the color variants which includes Mystic Black, Engineered Blue and Artisan Copper.

As per the leaked pre-order poster, the Galaxy Note 9 128GB base variant will go for 13,500,000 Indonesian Rupiahs /$935, while the 512GB version has a pre-order price of 17,500,000 Indonesian Rupiahs / $1,210 both of which falls short of Roland’s claims, however, the Note 9 pricing other regions may defile mere currencies conversion, so we might see some differences depending on the regions. 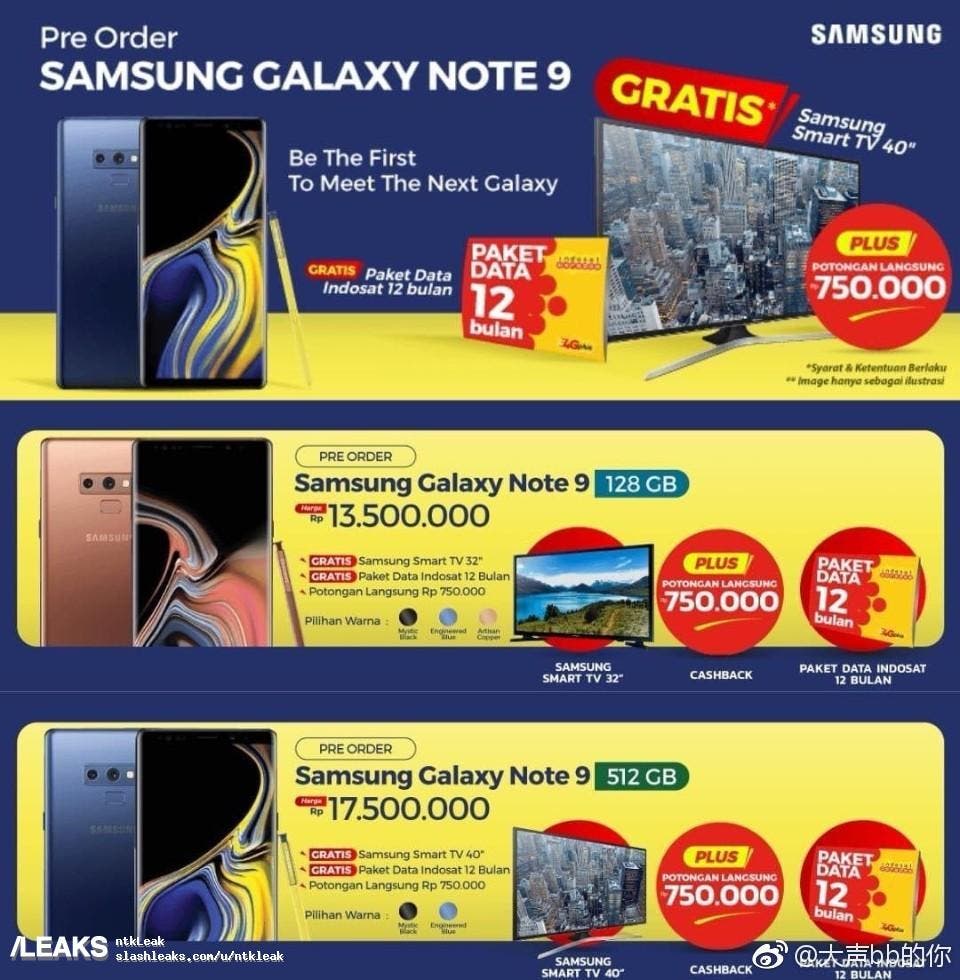 As incentives, Samsung will be offering customers mobile data in addition to 32 inches and 40 inch Samsung Smart TV depending on the model that they pre-order. We are not sure when the device will be available for pre-order in the country, however, reports have it that those in India will be able to pre-order the device as early as August 19. August 9 is the date when Samsung will unveil the Note 9 at the Galaxy unpacked event in New York, more details, as well as official pricng, would be announced on the said date.

Next Galaxy Note 9 Korean pricing surface in a new leak