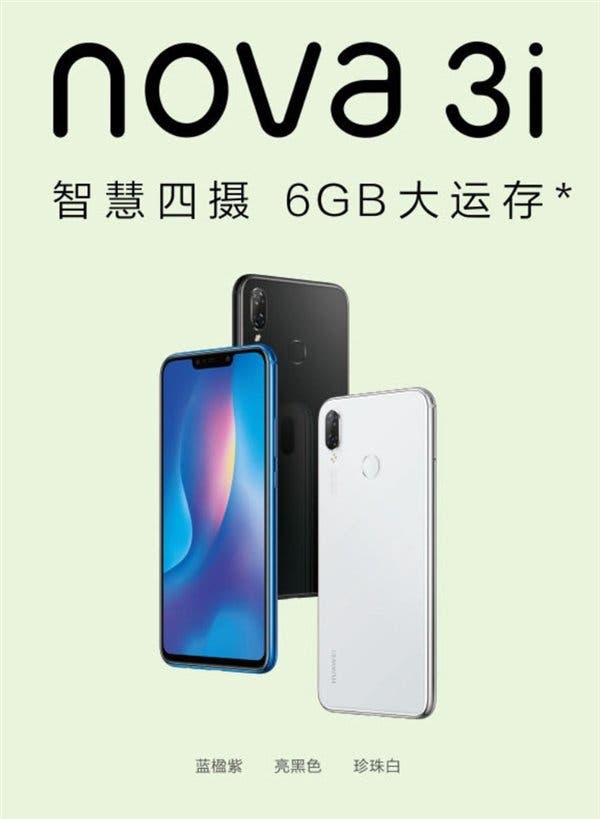 The Nova series smartphones have always been made for young customers. Therefore, the appearance is one of the biggest selling points. The Huawei Nova 3i has the same appearance as the original Nova 3. Thus, it adopts a double-sided glass + metal middle frame design and the much popular notch screen. The fingerprint recognition module is located at the back of the fuselage. There are a few color options, including blue, purple and bright black.

As we said, the Kirin 710 debuted with the Huawei Nova 3i. This is the company’s first 12nm process chip and the first Kirin 7XX series chip. It comes with an octa-core design comprising of four Cortex-A73 clocking 2.2 GHz and four more Cortex-A53 at 1.7 GHz. It supports LTE Cat.12/13, dual-card, dual 4G, dual VoLTE, and Skyway mode. In addition, the Kirin 710 also has an independent DSP digital signal processor + ISP image signal processor, which can enhance the phone camera capability in a low light environment. It also supports intelligent scene recognition as well as a secure face unlocking. In comparison with the Kirin 659 chip, the Kirin 710’s single-core performance is improved by 75%, the multi-core performance gained by 68%, and the overall performance is further improved.