Back in December 2017, we learned Microsoft is working on a foldable tablet, which was codenamed Andromeda. It is going to be a dual-screen Windows 10 device running on Windows Core OS, the company’s long rumored modular OS. Today, a new leak suggested the Microsoft Andromeda OS or the device itself could come with a productivity mode. 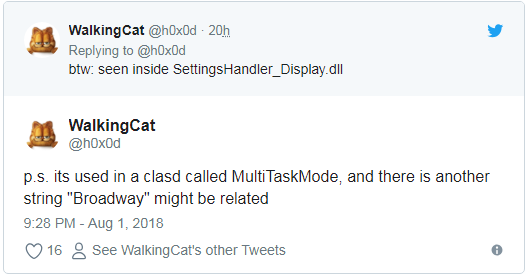 A Twitter user, namely, Walking Cat discovered a reference of ‘AndromedaProductivityMode’ in ‘SettingsHandler_Display.dll’. This string was spotted in latest Windows 10 SDK. What’s more interesting, there is also a reference to MultiTaskMode. As you know, like Windows 8, the current Windows 10 version comes with multitasking features such as snapping. This is a great way to use your screen more efficiently if you have several apps open. So after this leak, there is every reason to think Microsoft is also working on new multitasking features for Windows Core OS.

At the same time, another developer discovered reference of Windows Core Device Family in latest Windows 10 SDK. The ‘author’ of this finding, Tero Alhonen said that definition Windows Core Device Family is new and it’s from the latest SDK of Windows 10. Of course, we understand all these are at the stage of rumors. Though the evidence is real, Microsoft has never publicly confirmed whether the company is working on a dual-screen device or not.

We have heard rumors such as the Microsoft Andromeda will be packed with a Snapdragon 1000 chip and so the patent details. So we started thinking its launch date is close. Unfortunately, last month, it was reported had pushed back the release of Microsoft Andromeda. That’s why we think the Surface Andromeda will undergo both hardware and software changes before the company brings it to the market.