At the beginning of this year, at MWC 2018, ZTE announced two entry-level smartphones in face of the ZTE Blade V9 and ZTE Blade V9 Vita. But that time, the manufacturer couldn’t know the US will ban it. That’s why, though a model of ZTE V0900 appeared on the website of the Ministry of Industry and Information Technology in April, it hasn’t appeared on the market yet. Due to the US ban, the launch date of this thousand-yuan machine was postponed for an unknown time. But as we know, seems U.S. Senate backs pedals on ZTE sanctions. The first phone to come our way from this brand is talked to be the postponed Blade V9. Currently, it’s available for pre-order at ZTE Mall at prices tag of 999 yuan ($146) and 1199 yuan ($175) for the 4+32GB and 4+64GB variants, respectively.

The ZTE Blade V9 is packed with a 5.7-inch full-screen with an 18:9 aspect ratio and a resolution of 1080 x 2160 pixels. It also uses a double-glass housing and a metal frame. The fingerprint scanner is placed on the back, while the micro USB port and a 3.5mm audio jack are on the top and bottom sides.

Under the hood, the ZTE Blade V9 carries a Snapdragon 450 chip seen on the Xiaomi Redmi 5 first. It is based on a 14nm process node and is paired with a 3+32GB or 4+64GB of memory combination. The rest of key features include a 3100mAh battery, 16+5MP rear camera, 8MP front shooter, and Android 8.0 out of the box. 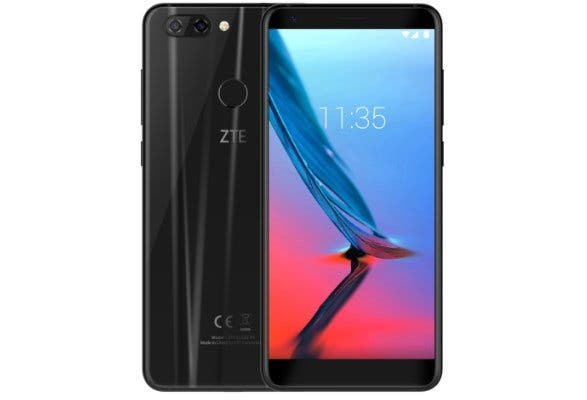 As we said, this is a classic low-end smartphone with a couple of trendy features such as a Qualcomm chip and a full-screen design. But it’s priced a bit more than its closest rival of the Redmi 5. So there are some assumptions it wouldn’t make a tough competition in the entry-level market.

Next Meizu 16 With 8GB RAM Spotted At GeekBench