Pocophone F1- the first smartphone from Xiaomi sub-brand Poco, unarguably isn’t near a perfect flagship as it lacks some the optical image stabilization for the cameras, NFC, and the spoiler – its rear is made of the plastic cover, something that has since been phased out -at least for flagship grade smartphone.

Aside from packing some spectacular packages under the hood, the Pocophone F1 shines as it comes with a somewhat mind-blowing price tag. The device launched in India previously at about $300 and launched earlier today in some major cities of the World. While today’s launch was limited to France, Malaysia, Singapore, Poco has confirmed the Pocophone F1 as part of its global expansion plans will be available in a total of 65 countries, Canada and U.S exclusive, even though you can buy same from a third party seller at some extra cost.

The image seen below is from Poco itself, and as you would notice, the Pocophone F1 won’t make it to the U.S and Canda but will be available in countries across Asia, Europe, Middle East & Africa, and America. 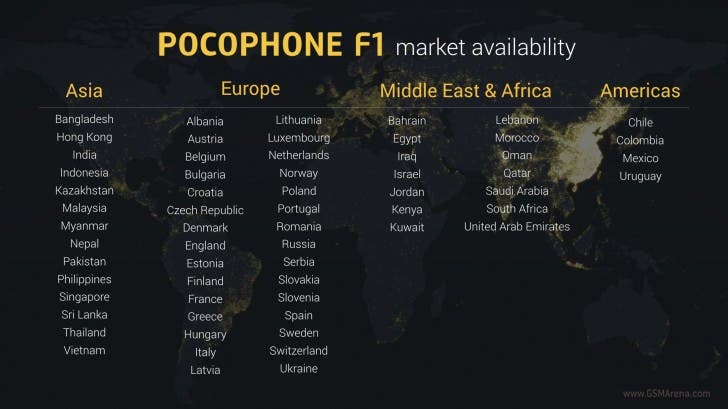 Please do note that you might notice some price variations from region to region, but may not be a sharp deviation from $300 USD for the 6GB/64GB variant which is still a bargain price for a device packing a 6.2 inch, 2246 x 1080 pixel display, a Qualcomm Snapdragon 845 processor, at least 6GB of RAM, at least 64GB of storage, dual rear cameras, a 20MP front camera, stereo speakers, and a 4,000 mAh battery with Quick Charge 3.0 support. You can view the Pocophone F1 full specs as well as pricing details in a few global markets.

Previous 2018 iPhones to be the last equipped with 3D Touch

POCO Laptops will soon be introduced in India

Here is when the POCO X4 will be launched, four models incoming