You might be forgiven if you have not heard of Pocophone before now. The brand is a Xiaomi offshoot that is determined to turn things around in the flagship phone segments with the launch of the Pocophone F1, a supposed master of performance as Poco calls it.

The device launched a couple of days ago in India was received with many excitements not just for its looks, what it got under the hood, but also for its competitive price tag. Its expected to go on sale in India via Mi.com and Flipkart from August 29.

Today, the Xiaomi sub-brand as promised in a simultaneous global event held in major cities of the World including  Paris, Jakarta and Hong Kong has announced the Pocophone F1 for the Global markets.

At its Paris event, the company announced that the Pocophone F1 with 6GB+64GB will retail in France at  €330, while 6GB+128GB model will cost €370, with the actual availability set for sometime in September.

Over in Hong Kong the base variant of Pocophone F1 will go on sale on August 30 for HKD 2,800 (€300), while it appears the top-end variant won’t be offered in the country. Those in Singapore will also be getting only the base variant with 6GB RAM and 64GB storage which will sell for S$449 (Rs.23,000 approx.).

In Malaysia too, the Pocophone F1 will go on sale on Thursday, 30 August 2018 which is a day before Merdeka Day and ahead of Malaysia’s SST implementation at RM1,237/$302 for the base 6GB+ 64GB variant, while the 6GB RAM and 128GB storage model will sell for RM1,428/$349. Both variant, however, will get a price hike which will jack the prices to RM1,299/$317 while the 128GB variant will go for RM1,499/$366 inclusive of SST starting from September 10. Launch offer includes a free Mi Sports Bluetooth Earphones (worth RM93) and a game holder for the first 200 buyers of any variant of the device.

Poco at the India launch event promised it will be rolling out the Pocophone F1 to over 50 countries in the following months, and it appears this is the first phase of the expected roll out.

The Pocophone F1 unarguably is the new flagship killer in town. It ticks all the boxes of a flagship smartphone, but at a much lower price tag. The device is powered by Android 8.1 with MIUI 9.6, and will be getting the Android Pie update before Dec 31. On top of that, Poco is promising quarterly security update. 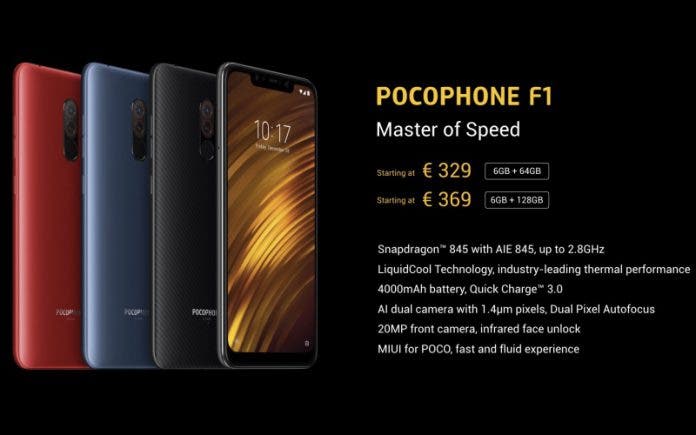 Next On-Screen Camera For Smartphones Could Launch Next Year