When speaking of smartwatches, most people should be very impressed by the Apple Watch series. But not only tech companies are interested in making smartwatches. Casio, which is known as a traditional watch manufacturer has also designed the more practical Pro Trek Smart WSD-F30 series of smartwatches. It’s a bit strange to see Casio offering ‘smart’ watches, but it’s also very interesting to learn its approach.

Compared with the previous generation WSD-F20, the Casio’s Pro Trek Smart series next-generation WSD-F30 upgrades the double-layer color screen from LCD to OLED. This is one of the main improvements made in this series that also makes the body more lightweight.

Moreover, in comparison to the previous generation, the bezel diameter is reduced by 3.8 mm; the outer casing length is reduced by 1.2 mm; the width is reduced by 3.9 mm; and the thickness is reduced by 0.4 mm. However, it is still heavy. But considering that this product is designed for outdoor enthusiasts, and passed the MIL-STD-810 military certification, the weight is acceptable.

This time, Casio also brought some new features to the WSD-F30, such as the new Extend Mode. In this mode, the watch dial will switch to the monochrome display, and only the time and sensor measurement data will be displayed. The GPS function of the watch is still valid, and the color map can be called up at any time by pressing the button. 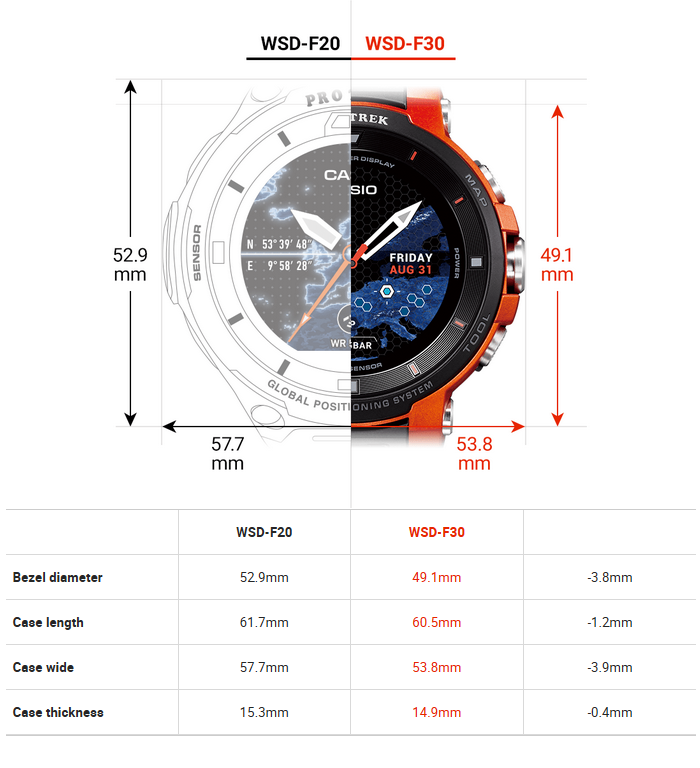 The endurance of smartwatches has always been a big problem, limited by the small space inside the watch and the stagnation of battery technology. At present, the life of most smartwatches is quite weak. The WSD-F30 is made for the outdoor enthusiasts. So it naturally needs more battery life.

That’s why Casio brings a new and improved watch mode to the WSD-F30. It disables the color mode and disconnects the connection to the smartphone. But the data provided on the watch can still be viewed through a monochrome screen. Casio officially said that the WSD-F30 has a battery life of up to one month in this mode.

The WSD-F30 comes pre-loaded with the Wear OS system from Google. It is also available in three color versions: orange, black, and blue. It is expected to sell for $549, and the release time may be around January next year.