It looks like Xiaomi’s Redmi Note 6 Pro might be heading for a pre-mature release In the US as the handset has just got green lights from Wi-Fi Alliance in the country. Prior to this, the handset appeared at the FCC and the actual identity of the handset was not confirmed at that time. However, the Wi-Fi Alliance passing certainly does reveal it.

We’re talking specifically about model number M1806E7TH and as you will see in the certificate, it is clearly described as Redmi Note 6 Pro. For this reason, it is now almost certain that this will be Xiaomi’s first Note series device in the US. Furthermore, the document doesn’t benefit us much in our quest to find more specs of the handset, as is the usual case with Wi-Fi certifications.

However, a renowned tipster, Roland Quandt, tweeted some info regarding the handset yesterday. As per that post, the Redmi Note 6 Pro will have a 3GB + 32GB version as well as a 4GB + 64GB version too. Moreover, it will also have a bevy of new colours and will start at 200 – 250 Euros. 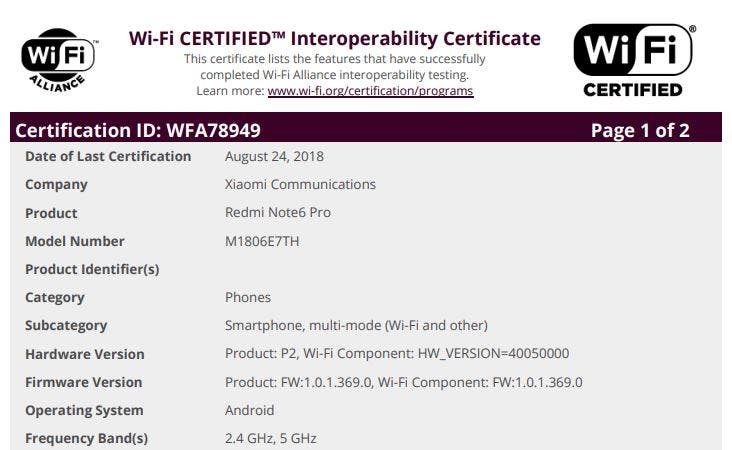 As for specs and design, honestly, there isn’t much authentic info right now. However, if Xiaomi is in a hurry to launch the handset (as it seems), then a good leak is somewhere around the corner.