Qualcomm seems to be interested in making chips for notebooks. The first generation ACPC (fully interconnected PC) using the Snapdragon 835 did not trigger a huge market reaction, and then Qualcomm introduced the 2.96GHz Snapdragon 850. Recently, there were reports that Qualcomm’s high-end ARM chip, initially developed as the SDM1000 will get a new name. Now, a new Qualcomm chip, Snapdragon 8180, just appeared on Geekbench and salient information suggests that this chip is not designed for smartphones. 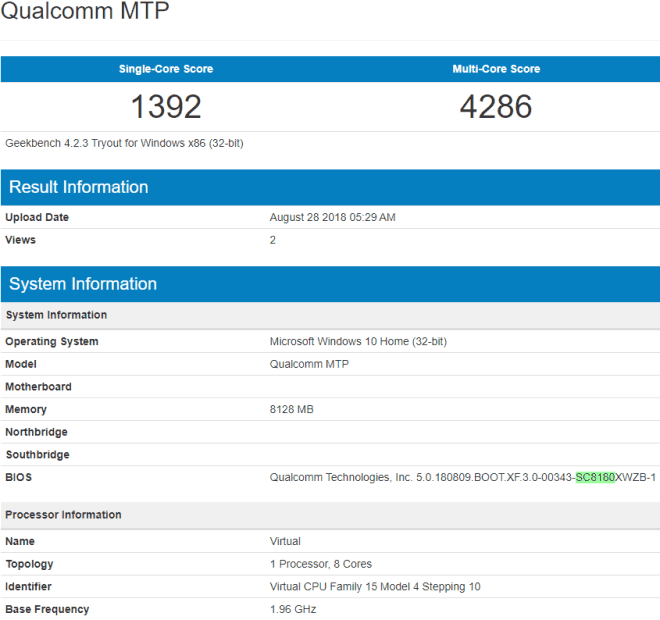 The chip is dubbed “Qualcomm MTP”. At first glance, this is unusual but if you take a closer look, it becomes clear that this is a first test run of a developer system running Windows 10 on ARM on a completely new chip – the Qualcomm “Snapdragon 1000”. or “SC8180”. Actually, “MTP” stands for “Mobile Test Platform”, which does not necessarily mean a smartphone platform. Since the new chip, which was recently introduced to us as the SCX8180 and was previously developed as “SDM1000”, with a size of 20×15 millimeters, it is considerably larger than its mobile counterpart thus it should indeed be a notebook SOC.

Qualcomm will present the Snapdragon 8180 for the first time next year. The earliest manufacturer to use this chip will be Taiwanese PC manufacturer ASUS, which is currently working on a device with the codename “Primus”. However, we do not expect to see this notebook or SD8180 anytime soon.