Samsung mobile recently announced the Galaxy Note 9, the Galaxy J2 Core, and its billed to possibly launch a Quadruple Camera smartphone, and another smartphone tipped to be a Foldable smartphone soon. Now, it appears the brand got another device that could be hitting the market soon, just as a new Samsung device with the model number SM-T927A has now received the pre-requisite approval from both Bluetooth and Wi-Fi authorities. 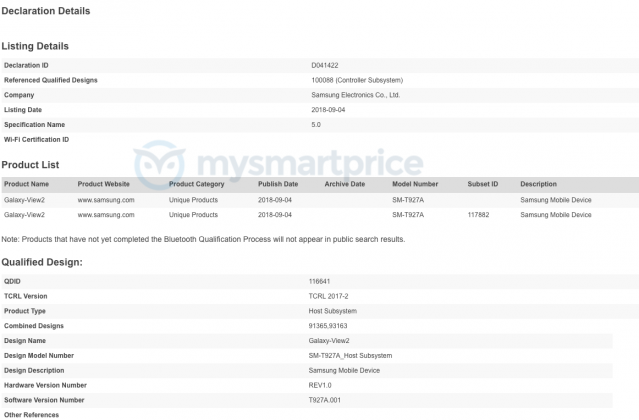 Further digging into the certification documents, the device was revealed to be the Samsung Galaxy View 2, however, the listing does not offer much insight into what we should expect of the device in terms of the internals. The document hints that the Galaxy View 2 tablet will support Bluetooth 5, Wi-Fi 802.11 b/g/n ac connectivity with 2.4GHz and 5GHz frequencies, while it will boot the now dated Android Oreo out of the box. 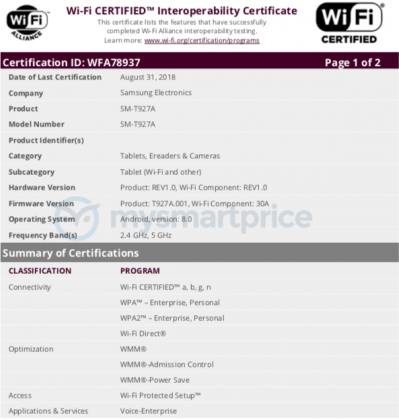 News about the Galaxy View 2 first surfaced in the news back in August, when it was reported that it will come with a more compact and practical design fitted with a shrunken 17.5-inches display with a similar FHD (1,920 x 1,080), while it will reportedly get a Samsung-made Exynos processor coupled with 3GB RAM, with Android 8 OS out of the box, while a Stylus Pen is reported to be part of the package

Previous Honor 7S launched for Rs 6,999 to compete with Redmi 5A in India