Every year, many companies apply for thousands of patents that are used in their products. As a result, in June, an industrial equipment firm called Kempler Industries released a set of statistics concerning the best places and companies for patent innovation in honor of the awarding of the 10 millionth patent. Surprisingly, the Cupertino-based Apple ranks too low. It’s the 11th only in the list of most innovative companies. 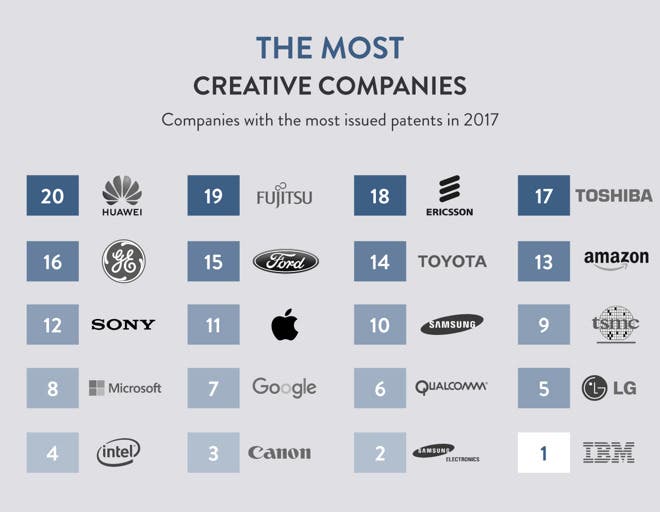 The study is called ‘Innovation Around the World: Where Patents Come to Life.’ In it, California is the number 1 on the list of U.S. states with the highest number of patents per capita in the last five years. However, it is followed by Massachusetts, Washington, and Minnesota. The last one is Mississippi, followed by Alaska and West Virginia. Surprisingly (at least to me) in the last five years, the U.S. is only third, behind Taiwan and Israel when it comes to countries’ patents per capita.

Well, this is quite interesting. But what about the most innovative companies in the world? In this sense, Kempler has identified the most creative companies as well. It was counted based on the companies that were issued the most patents in the year 2017. IBM is first, Samsung Electronics is second, Canon is third. And as you see, Apple is 11th.

Of course, we understand the number of patents has nothing in common with their quality. But the latter is a relative concept, while the former one is measurable. Moreover, not all patents mean they are innovative or creative. Not all patents are of equal value or impact, and not all, or even most of them, even end up as part of products.

As AppleInsider mentions, they have found a significant volume of the patents issued to IBM and other firms covering the same invention, with minor permutations of the titles and contents to differentiate the inventions.