The listing suggests the device will unsurprisingly retain the old 16:9 aspect ratio with a Quad-HD display, and a resolution of 2560×1440 pixels. The benchmark listing also unsurprisingly tells us the Razer phone 2 will house the Qualcomm Snapdragon 845 SoC with Adreno 630 GPU.

Listed also is 8GB RAM and 512GB of internal storage similar to the Galaxy Note 9, however, there could be other variants with lower storage, that could probably attract lower price tags.

Surprisingly, the Razer phone 2 prototype tested on AnTUTU boots Android 8.1 Oreo out of the box, instead of the latest Android 9.0 from Google. Though there are chances the final version of the device might come with Android 9.0 Pie when released. The device returned a performance score quite similar to the likes of the Galaxy Note 9 from Samsung, and the Oneplus 6, but just below 292K recorded by Xiaomi’s Blackshark. 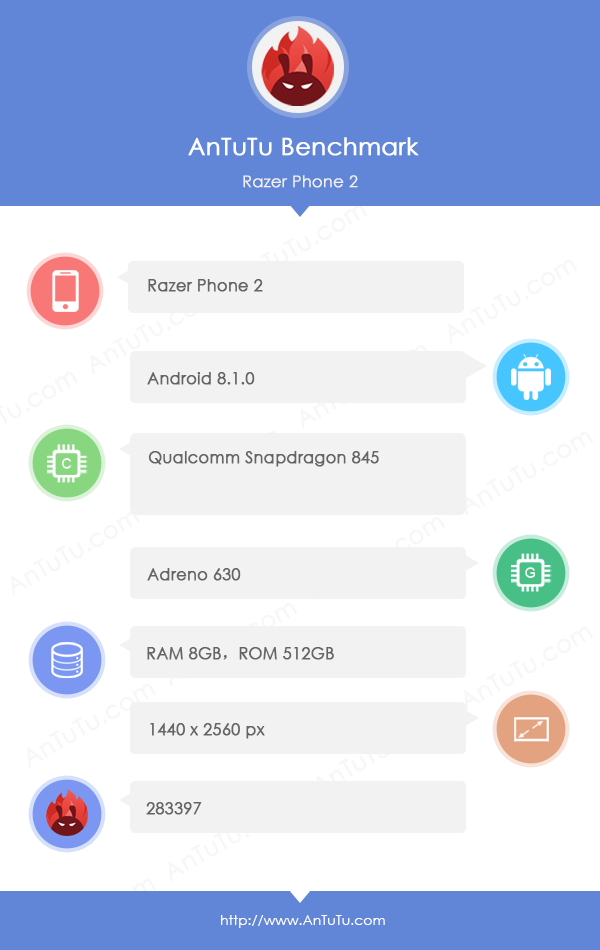 Only a few days ago,  leaker, Roland Quandt reported that Razer Phone 2 may include the Chroma lightning: an LED light technology found in most of Razer’s products which you can adjust to your preferences, down to the exact color tone.