While the world is paying attention to Apple’s 1,000$ iPhone XS, which will be launched this month, India, as expected, will not show any interest in Apple’s new products. Not because it doesn’t like smartphones – India is now the world’s second-largest smartphone market – but because the iPhone’s market share in India is not as good as elsewhere.

The Indian smartphone market is currently the main battleground for many handset manufacturers from China, Taiwan and South Korea. While smartphone shipments have slowed in many parts of the world, the Indian mobile phone market continues to grow. Research firm Counterpoint said that in July, a total of 42 different smartphones were launched in India, up from 25 in the same period last year.

Most new phones come from Chinese smartphone manufacturers, many of which believe that India is their most important market. 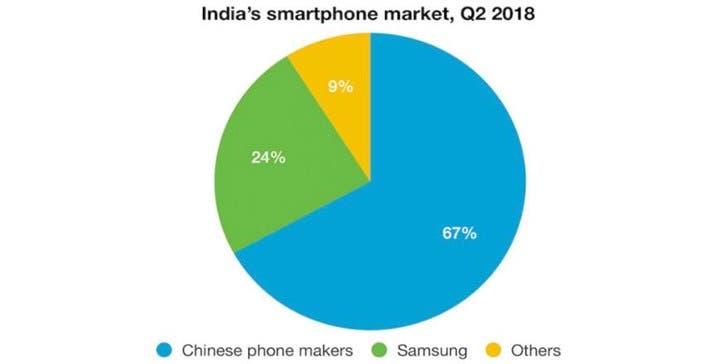 Leading the way is Xiaomi, which last year ended Samsung’s five-year winning streak as India’s largest mobile phone supplier. According to IDC, from April to June this year, Xiaomi became the largest supplier in India for the fourth consecutive quarter. Xiaomi (29.7% market share as of the second quarter) has greatly weakened competitors products by selling cheap but high-quality smartphones in India. A spokesperson for the company said that India is currently its most important market.

According to IDC, four of the top five smartphone manufacturers were Chinese companies in the second quarter of this year. In addition to Xiaomi, it also includes OPPO (7.6%) and VIVO (12.6%). IDC said in a report released last month that these companies, together with Chinese mobile phone manufacturers such as Lenovo, accounted for two-thirds of the local Indian smartphone market in the second quarter. Three years ago, these companies had a total market share of less than 15% in India.

Next HTC's revenue has fallen 97%, the worst performance in 15 years