A new smartphone, probably the Realme 2 Pro is coming from Oppo’s new offshoot- Realme. Madhav Sheth, CEO of Realme India, during the concluding part of the Realme 2 announcement about a month ago confirmed that its firms still got “one more thing 2 surprise you” in September, and that lead to speculations that the Realme 2 pro might be on the way. So you may wish to hold off getting the Realme 2 because a more capable option might arrive in a matter of days.

In line with that, news coming from India says Realme has issued media invited for a launch event later this month in India. The invite a copy of which is shown below doesn’t specifically state when exactly the event will hold, but it is obvious it will be held over a two days period, probably in different locations.

While the invitation hasn’t also explicitly state what product the firm intends to unveil, it is quite clear to the discerning eyes that we dealing with the RealMe 2 Pro as indicative of the red lettering of the invite image. 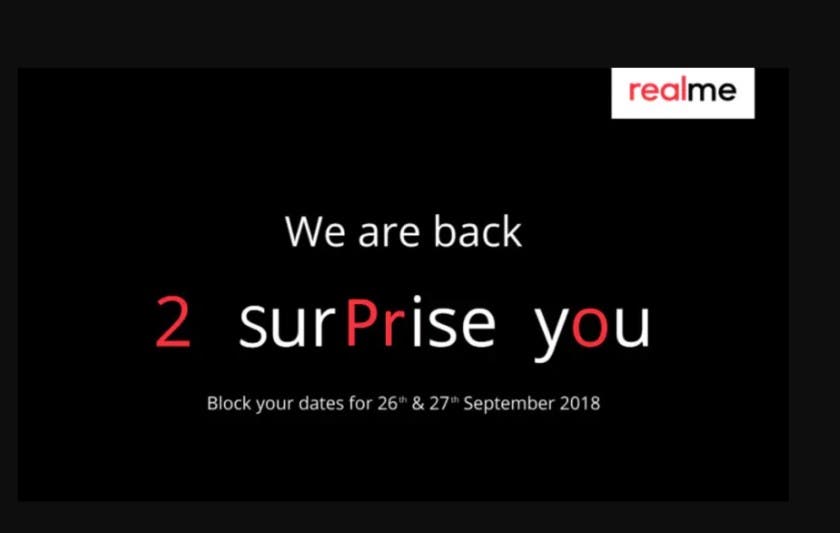 At this point, there are no hints on what to expect of the device, however, if indeed the Realme 2 comes to reality, we expect it to come as a mere souped model of the base RealMe 2 probably with a more capable SoC, more RAM, and as per a report from The Mobile Indian, the Realme 2 Pro will be priced slightly higher than Realme 1, but less than Rs 20,000.

Realme is asking that you keep a date with it on 26 and 27 September for the official introduction of the product, perhaps, maybe before then, we would get to dig out more information about the device in question.