At its 2018 Galaxy unpacked event held a while ago in the NewYork city, Samsung electronics officially bided goodbye to the Galaxy Gear Smartwatch brand in favor of a new moniker – the Samsung Galaxy watch. The Samsung Galaxy watch obviously sounds better as it matches every Samsung Galaxy smartphones brand. Now, a recent trademark filing submitted by Samsung suggests the company may be towing the same path for its earphone brand.

While the company already makes wireless earbuds under the Gear Icon branding, the company has now filed for a trademark application for ‘Samsung Buds’ at the European Union Intellectual Property Office (EUIPO) last week.

Although the listing gives no detail of what the name might be used for, our guess is that it might be targeted at similar sccessoris from competitiors like the Pixel Buds from Google, OnePlus bullet wireless andeven the Apple earpod. Its very likely Samsung be be ditching its Gear icon branding or its AKG earphone branding in favor of a more simplistic Samsung buds. 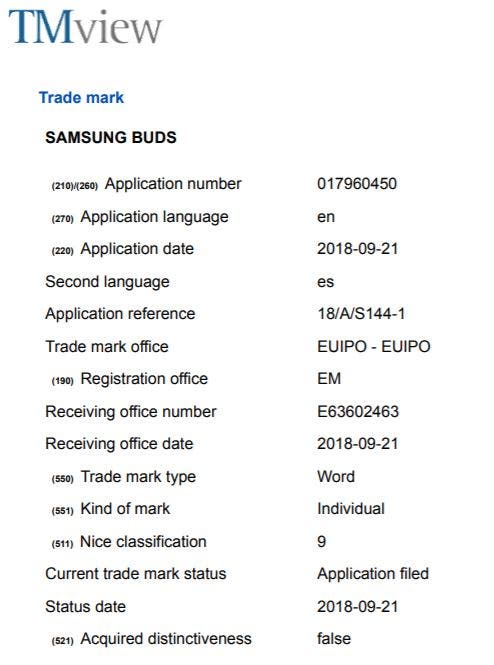 Only recently, Samsung mobile filed a new trademark at the European Union Intellectual Property Office (EUIPO). The new trademark filing is for the preotection of  “The Future Unfolds”, which could be a tagline it intend to used for hyping it much anticipated Foldable smartphone due to arrive later in Novembe. It wouldny be supring if we see the company unveil a new Samsung bud alonhside the foldable device later in November.

Rumors and leaks about the Foldable device from Samsung have intensified in the past few days, and we’ve been keeping track of each leaks, and promise to bring you more about even about the Samsung buds  as they unfolds.