Returning a single-core score and multi-core score of 1332 and 4675 points, the Redmi Note 6 pro is seen running on the Snapdragon 635 SoC coupled with 4GB RAM, and Android 8.1 Oreo. The choice of the dated SD 636, as well as the Android 9.0 Pie, looks strange as it was the same SoC that powered the Redmi Note 5 Pro. 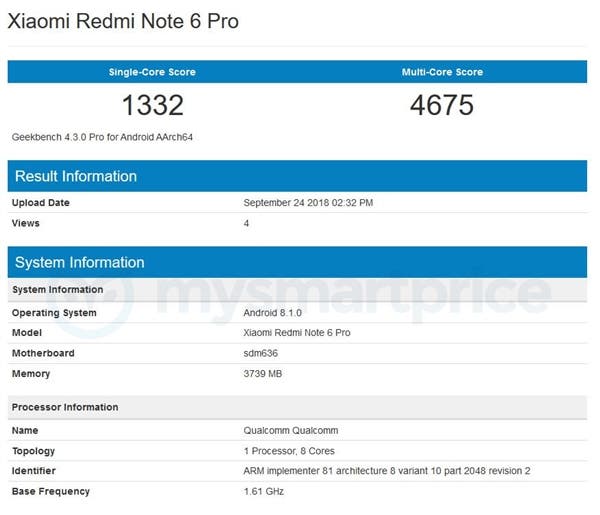 While no other information of Redmi Note 6 pro was revealed by the listing, previous leaks and rumors say the device will come fitted with a slightly larger 6.26-inch Full-Screen IPS LCD display with a notch at the top, with 1080 x 2280 Full HD+ resolution and a 19:9 aspect ratio. A fingerprint sensor, as well as a dual rear camera setup, is expected to adorn the rear side, while a similar dual camera setup should be found inside the notch. Although the Geekbench listing only has one RAM variant listed, previous leaks suggest the device will come in 32 GB storage + 3 GB RAM and 64 GB storage + 4 GB RAM models.

The Xiaomi Redmi Note 6 Pro much like its predecessor is expected to be encased in a metallic chassis with up to five color hues and will be powered by a 4,000mAh battery.