Recent leaks and reports claim the OnePlus 6T will be officially unwrapped on October 17 probably in China. While OnePlus is yet to confirm or dismiss that claim, a new leak from around the web hints the OnePlus 6T may arrive India shortly after its Global debut.

First reported by AH, a newly leaked image supposed to be the official invite to the OnePlus 6T launch in India has been uncovered. The leaked invite has “Unlock the speed”, OnePlus 6T launch event, October 17 in India. While the invite doesn’t contain anything much, it does reveal the OnePlus 6T India launch will take place a day after its global unveiling.

it’s no secret that major players in the mobile industry such as Razer, LG, Huawei, Google, and even Samsung will on different dates unveil their latest offerings, so the October 16 global launch date, and the Indian 17th date makes sense. 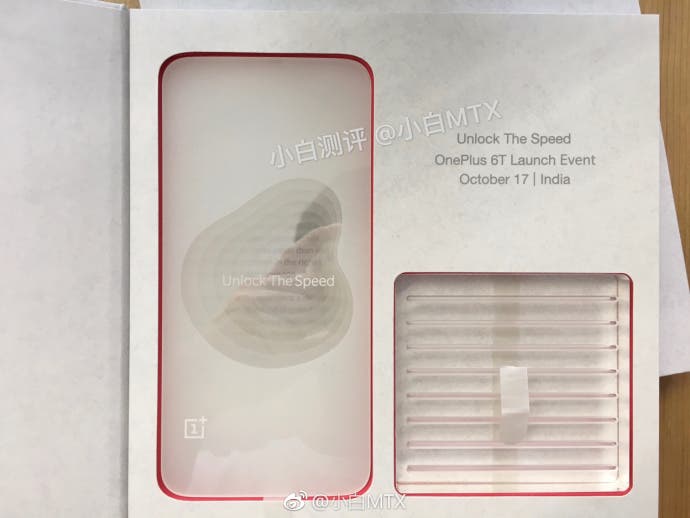 Only recently, we posted some images for what is reportedly the OnePlus 6T which basically confirmed that the device will indeed have the water drop notch design and the in-display fingerprint sensor under the screen. We reported a while ago that for the fourth time in a row, OnePlus and Amazon India are teaming up to make its smartphones available to Indians, and as seen on the OnePlus 6T Amazon Oneplus landing page, the OnePlus 6T will be exclusive to Amazon India.