Google will hold a press conference on October 9th where the American company is expected to bring new products including the Pixel 3 series smartphones. Google has released some elusive trailers with respect to these upcoming smartphone but the current teaser is a bit of a hard nut to crack. After teasing the “Pixel Mini (maybe Ultra)” and “Super Selfie”, Google released another teaser which seems to be related to the size of the phone, but it is even foggier than the previous teasers. 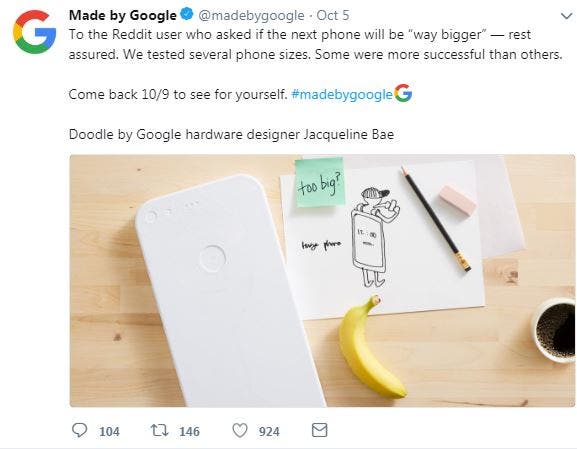 Google put a banana (for scale) in the new notice with the words “too big” and “huge phone”. The teaser caption shows that it is related to the size of the phone. The image on the teaser shows a young creepy chap holding what seems like a rectangular object (phone) with both hands. There is no indication of a notch on this one, could it be the Pixel 3XL notchless version? Google should know better that it will probably suppress the notch version thus this is most unlikely. Maybe we should be expecting a new Pixel Ultra which should have a large display without a notch.

There is no certainty to this teaser but its good that this phone will be unveiled in two days thus it’s not a long wait. Google’s upcoming Pixel 3 series phones include two different models: Pixel 3 and Pixel 3 XL. The Pixel 3 XL is the larger model with a screen size of 6.7 inches. If Google surprises us with a larger display Pixel Ultra, then it will be a damn big phone close to 7-inches.