Recently, HMD Global quietly replaced the device it uses to release information on Weibo. This change revealed one of the major selling points of the next Nokia X series new machine – Zeiss lens. Specifically, Nokia has been using Nokia 7 Plus to release information on Weibo, but after October 5th, Nokia’s official device indicator on Weibo was replaced with “Nokia X Series Zeiss mobile”. 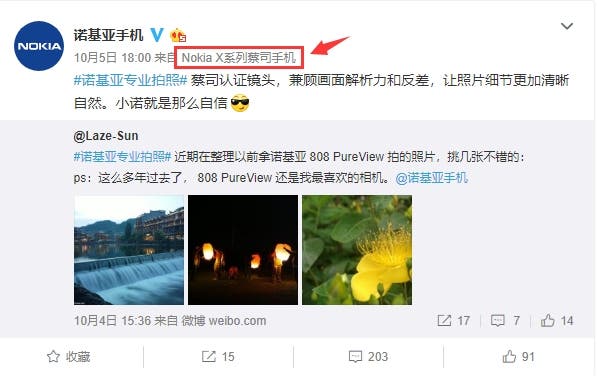 As we all know, Nokia’s current devices has ZEISS-certified cameras but the Nokia X series (including X6 and X5) does not have a ZEISS-certified model. So there is no doubt that the current phone that Nokia uses for its Weibo posts is an unreleased Nokia X series and the camera of this model has passed ZEISS certification. Based on recent information, this new smartphone is likely to be Nokia’s upcoming Nokia 7.1 Plus. According to Nokia’s naming convention, this model will be renamed Nokia X7.