As we expected, Google announced a very classy Google Pixel Slate at its #madebygoogle event in New York. This is Google’s first Chrome OS tablet with a detachable keyboard and it starts at $599 simply for the base variant with a Celeron processor. The folio keyboard costs a separate $199 and there’s also a stylus that costs another $99.

The Google Pixel Slate turned out to be exactly like the leak that emerged a day earlier in terms of design. Google was quite vague on the kind of display but it has a 293ppi density and a 3:2 aspect ratio. It’s roughly the same size as the Pixelbook and it has really thin bezels at the sides and there’s a fingerprint reader embedded inside the power button.

The Pixel Slate has an 8MP camera on both the sides while the front-facing Duo Cam provides an extra wide field of view with exceptional low light performance. The tablet also has stereo speakers like we earlier saw in leaks. And it will also come with a 3-month free trial of YouTube TV. The battery is promised to last 12 hours of use as stated by the company.

The folio keyboard has rounded keys and they’re backlit. They don’t make noise and they’re black with the folio being Blue. As for the processor, there are four models. Check the details in the image below. 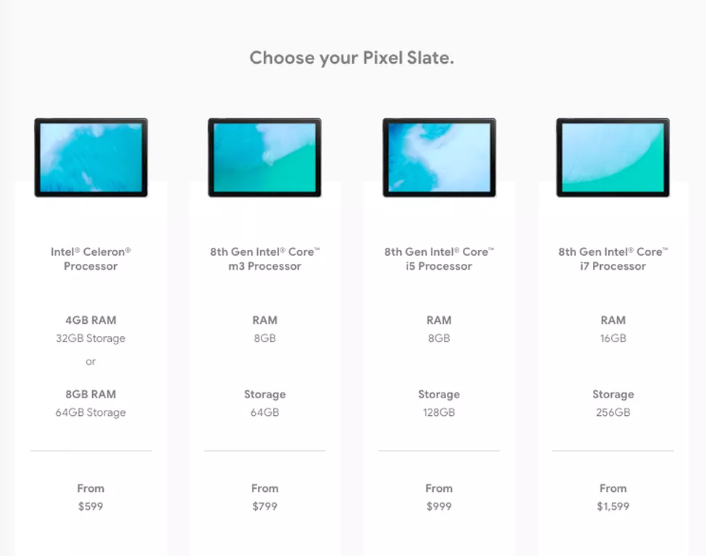 The Chrome OS that debuted is also reimagined for a better work and play experience. You get quick multitasking split screen, deep Google Assistant integration, AI-suggested apps based on your usage, full desktop Chrome browser, and much more.

Read Also:  Users trust Amazon and Google more than Apple when it comes to privacy

Next Google announces the Pixel 3 and Pixel 3 XL with notch, wireless charging and more