A few days ago, we learned Huawei will launch the cheaper variant of its MediPad M5 through its most successful e-brand. The Honor MediaPad T5 or so-called Honor Tablet 5 will be packed with dual speakers, Harman Kardon tuning, and Histen 5.0 technology. The launch date is set on October 11. Thus, tomorrow this new tablet will be uncovered officially. Today, the company released the next official pre-heating poster, which reveals the tablet’s appearance. Plus, from the poster, we learn it will come with GPU Turbo technology. 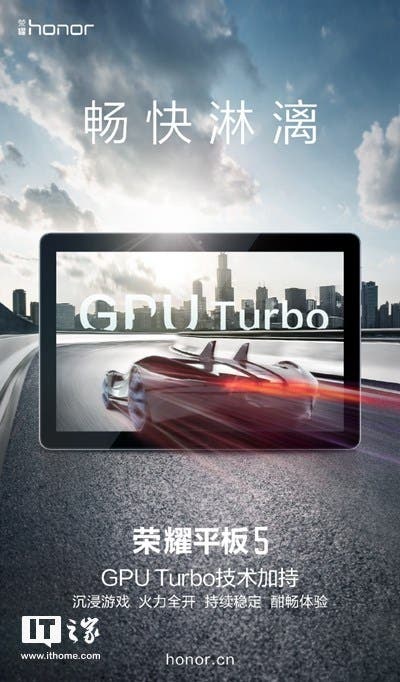 Looking at these features, we can assume the upcoming Honor MediaPad T5 is going to be good in terms of game and media performance. Actually, it’s not as surprising as many can think. Currently, we see a new trend in the tablet market. Almost all the latest tablets launched by the Chinese tablet makers have launched devices focusing on these two aspects. The Xiaomi Mi Pad 4 / Xiaomi Mi Pad 4 Plus, the Huawei MediaPad M5 and other handsets come with strong game performance support and corresponding hardware/software.

As the previous poster shows, this tablet will use a one-piece metal back cover. As for the rest of the features, the Honor MediaPad T5 will adopt a 2K screen. But there is no hint on the processor. Probably, the company will put the Kirin 970 under the hood.

Next Huawei Denies Cooperation With Microsoft