This year has been quite busy with every new smartphone launch, but October will probably be the biggest month of this year, with many smartphones being released. Nokia already had its parcel of October with the recently released Nokia 7.1, and the Nokia 7.1 Plus scheduled to come on the next week. Apparently, there is another smartphone from the company to be unveiled. The device carries the Nokia 3.1 Plus moniker and can be revealed tomorrow.

Just a week ago, HMD Global confirmed that it would be holding an event in India tomorrow – October 11. After the announcement, many teasers pointed to the launch of a smartphone with a “mega display.” At that time we assumed that this device would be the Nokia 7.1 Plus. However, a new image leak, captured by the folks at Smartprix suggests that this will not be the case. 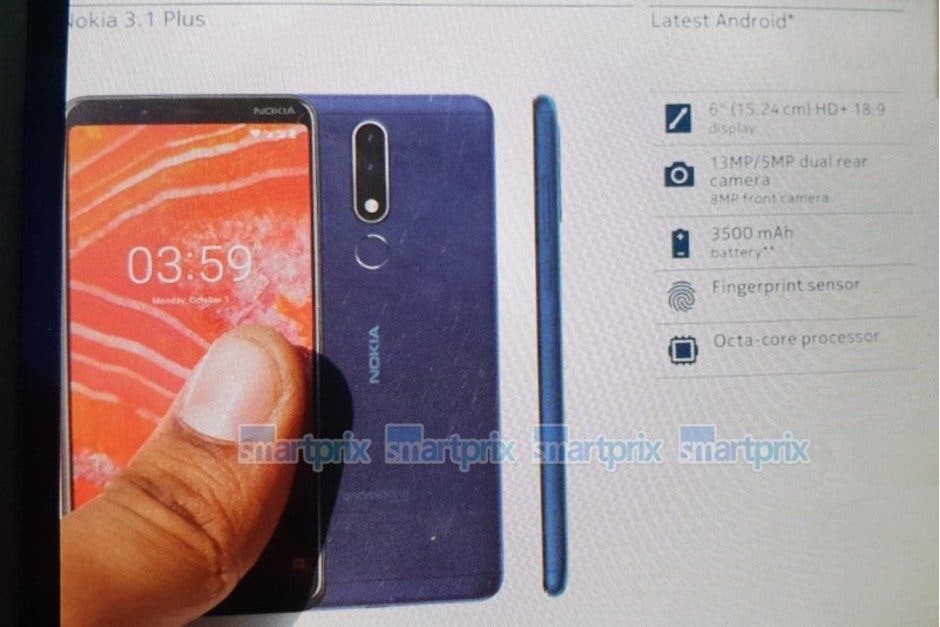 According to this report, the upcoming device will be called Nokia 3.1 Plus, and unlike Nokia’s recent Plus models it will be a notchless smartphone with a 6-inch display. Instead of adopting the controversial design language, Nokia will introduce a standard 18:9 panel without any screen cutout. Moving to the smartphone rear we can see what seems to be an aluminum build. In the middle, we have the fingerprint scanner, which is placed below the dual 13MP+5MP rear cameras. On the front, there is an 8MP selfie snapper.

Internally, the device is powered by an unspecified Mediatek’s Octa-Core chipset. Unfortunately, neither the amount of RAM or Storage have been revealed, but judging the device’s price and segment, we can assume that the base variant might come with 3GB of RAM and 32GB of expandable storage. To keep the things running the device will come with a 3,500mAh battery, optimized by Android 8.1 Oreo. Of course, this will be another Android One smartphone from Nokia, so buyers can expect Android Pie update in a near future.

We advise to take these reports with a pinch or two of salt, but if the device is indeed coming tomorrow, we won’t need to wait too long for a confirmation of specs.

Previous Razer Phone 2 surfaced on Amazon before the official announcement