Hello and welcome to October’s edition of our top 5 Chinese smartphones for under $500 roundup! This month, we have a couple new interesting additions to go along with some already solid phones which have kept their spot on the list. If you were looking for the best phone money can buy – yes, we aren’t spending more than $500 on one, then keep reading!

The Xiaomi Pocophone F1 is, of course, one the best phones you can currently get under $500, heck you can even find it for less $300 if you look around. Xiaomi’s latest flagship killer packs some of the best hardware on the market, while costing a fraction the price of many other options.

The Pocophone is powered by a Qualcomm Snapdragon 845 along with either 6GB of RAM (8GB for Armoured Edition) and 64GB, 128GB or 256GB of internal storage (expandable).

The handset sports a large 6.18-inch Full HD display with a high res 20MP selfie snapper above it, meanwhile on the back we find a dual camera setup comprised of main 12.2MP and a secondary 5MP shooter.

Last month the Meizu 16th was able to get on this list due to its good to performance to price ratio along with its sweet design sporting very slim bezels all around the display and an under display fingerprint scanner. This time around, we swap it for its bigger brother, the Meizu 16th Plus, a bigger 6.5-inch phone using a Super AMOLED panel FHD+ that is powered by a flagship Qualcomm Snapdragon 845 CPU, paired with either 6GB or 128GB of RAM and 128GB or 256GB of internal memory.

If you want to save some extra bucks, check out the smaller Meizu 16th which is equipped with the same hardware.

The Xiaomi Mi 8 keeps a spot on the list as it’s still one of the most affordable SD 845 powered phones at just over four months since its official launch. Xiaomi’s phone comes with a  6.21-inch display, the previously mentioned Qualcomm Snapdragon 845 SoC along with 6GB of RAM and either 64GB, 128GB or even 256GB of storage

Alternatively, if you’re willing to spend a little extra while staying under $500, the under display fingerprint scanner equipped Xiaomi Mi 8 Pro might be a great option.

If you don’t like Xiaomi or its MIUI, the Honor 10 might be up your alley. The handset comes with a really powerful Huawei HiSilicon KIRIN 970 along with 6GB of RAM and either 64GB or 128GB of storage (both expandable and at less than $500).

If you prefer bigger phones, you can also check out the Honor Note 10 coming with a massive 6.95-inch display and a larger 4900mAh battery.

Coming at around $500 (below $500 for China version) we have one of the best handsets you can get out of China if you love an almost stock Android experience – the OnePlus 6. OnePlus’ latest handset is equipped with the flagship Qualcomm Snapdragon 845 along with 6GB of RAM and 64GB of internal storage, which fuel the large 6.28-inch 2280 x 1080 19:9 AMOLED display.

Beware, the OnePlus 6T is launching this month, so if you don’t want to be burnt you might want to wait for the new flagship to be released into the market. Albeit it’s really hard to tell if it’s gonna be under $500. 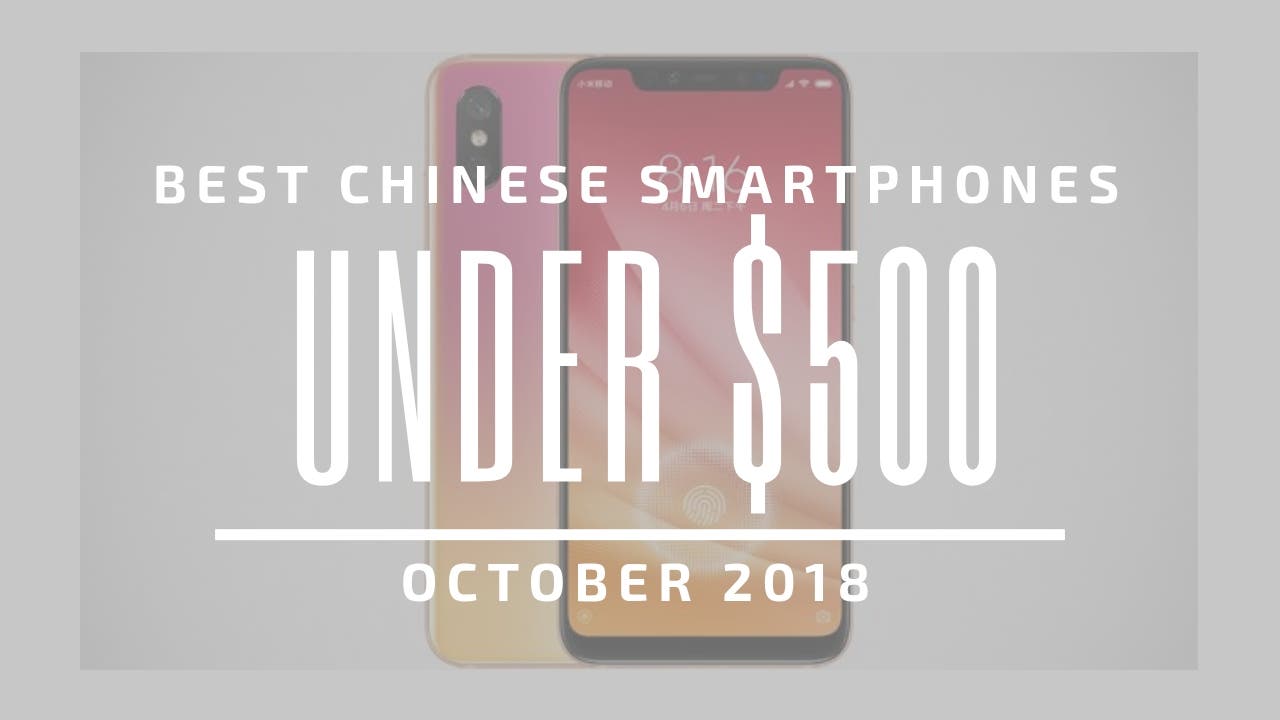 This is it for the month of October, hopefully you have found your next daily driver among our picks. If you didn’t and you’d have suggested other options, then let us know in the comments below!