We’ve first learned about the Lenovo S5 Pro at the end of September, thanks to Weibo post made by Lenovo’s VP. Now we already know that this handset will come on October 18. Today the aforementioned device appeared on the GeekBench Benchmark revealing the score achieved by the specs set. Specs that have been fully revealed by TENAA listing, as well as some pictures showing the device’s design. 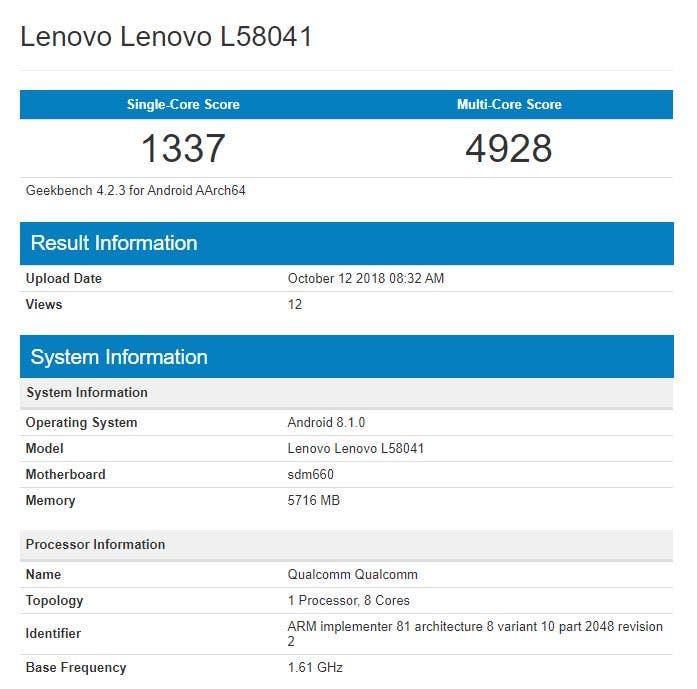 The S5 Pro surfaced on GeekBench with the “Lenovo Lenovo L58041” codename. The benchmark result reveals that the device will be powered by the Snapdragon 660, which will come paired with 6GB of RAM. The Benchmark scores 1337 and 4928 points for the single-core and multi-core score respectively. The handset will come with Android 8.1 Oreo right out-the-box, which considering Pie’s availability is already an outdated version of Android.

When it comes to the TENAA listing, the same device, with the same codename decided to pay a visit to the Chinese regulatory agency. The TENAA listing includes all the specs of the device as well as some pictures showing some key design elements. According to TENAA, the device will feature a 6.18-inch panel with 2246×1080 pixels of resolution which results in a 19:9 aspect ratio. Based on this it’s safe to assume that the Lenovo S5 Pro will be another device from Lenovo to embrace the Notch.

TENAA says that the handset is powered by a 1.8Ghz Octa-core processor and will come with either 3GB/4GG/6GB of RAM and 32GB/64GB/128GB of internal storage. Like its smaller brother, the Lenovo S5 Pro will feature a dual-camera setup on the rear, composed of a main 20MP sensor coupled by a 12MP secondary sensor. On the front, there is another dual-camera sensor with 20MP+8MP. Could these four cameras reflect Lenovo’s VP teaser, posted in the last month about a Lenovo device with Quad Cameras?

Judging by TENAA images the front of the device is covered in glass, and the back is entirely made of metal, however, there are no visible antenna lines. The image also reveals the rear placement of the Fingerprint Scanner.  The Volume Rocker and Power button are placed on the right side of the frame, while the SIM tray rests in the left.

Next ZTE Axon 7 receives Android 8.0 Oreo update, but it's full of issues