On October 16th, OPPO officially announced that 17 models will be upgraded to the official version of ColorOS 5.2.1. The new system brings an important feature: Oppo Hyper Boost technology. OPPO Find X was the first to get this feature earlier this month. In November more models will join the FIND X and they include OPPO R11, R11 Plus, R11s, R11s Plus, A83, and A1. In December, OPPO R9s, R17, R15, R15 Dream mirror version, A5, A79, and A73 will join while in January 2019, upgradable models include OPPO R9s Plus, A77, and A3. 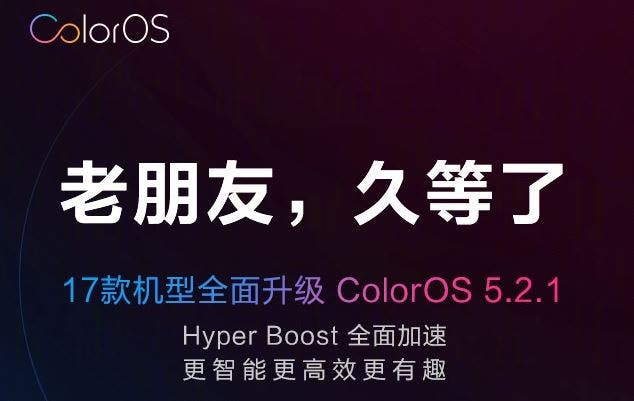 The Hyper Boost Acceleration Engine is a system-level optimization solution independently developed by OPPO for three years. This optimizes the smartphone and the app startup speed can be increased by 31.91%, with smoother interface switching. According to the official introduction, OPPO deeply analyzes the scenarios of 5000+ application software, establishes a system-level dynamic acceleration algorithm, makes Hyper Boost become a performance scheduling expert, understands the needs of each APP, allocates them reasonably, and reduces the troubles caused by the waste of system resources.

More importantly, OPPO Hyper Boost technology is optimized for 2 mobile platforms, 3 major game engines, and more than 10 popular games. It has added polymorphic network acceleration technology to solve the problem that users do not have network status when playing games in an extremely weak Wi-Fi environment.

Next [Deal] Xiaomi Townew Smart Trash Can Now Available From $113.35